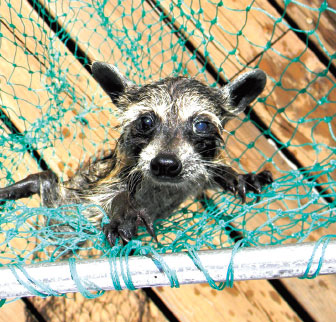 So, I was washing the bow pulpit on my boat. No. I was down on my knees, stiff bristled brush in hand, scrubbing the bow pulpit, and grumbling that I had to do it again. That little green heron had once more left me a generous token of his esteem. Then, I heard it, a chattering that sounded sort-of like the noise a green heron makes when upset or disturbed. I stood up and looked around for that little bugger, prepared to give him a talking to.

I do talk to birds, and other animals, but not inanimate objects. I know they don’t understand my chattering any more than I understand theirs, but it feels good.

Where was he? I couldn’t find him. But, the chattering continued. It sounded low, down on the water near the seawall. I stepped off my boat to look closer. The chattering was a baby raccoon in the water, trying but unable to climb the piling to safety.

Well, OK, he needed rescue. But, I knew better than to reach down and grab him. As weak as he obviously was he was still a wild animal. Wild animals scratch and bite. Raccoons have sharp teeth and claws, and they are a vector for rabies.

So, I went for my leather gloves and old fish net. And, I told my wife, Joan, what I was doing, thinking she might be interested. She was. I dipped the raccoon out of the drink and she took his picture, saying, “This will make a good story.”

If it had been an adult raccoon, I’d have simply released him. Or her. I’m not sure. This was a baby and weak, probably from several hours of struggling to stay afloat and get out of the water. It still needed a parent, but the parent was nowhere to be seen.

I dumped the raccoon, without much ceremony, into an empty 30 gallon bucket and dropped in a large towel. He was shivering. We called a few likely agencies and finally settled on The Conservancy of Southwest Florida. “I’ve just pulled a baby raccoon out of the bay and I don’t know what to do with it.” “Did you touch it?” That was the first question. Wow! Glad to say I know better.

I put the trash can in the back seat of my SUV, drove the critter to The Conservancy on Goodlette Road, followed the Injured Animals signs, and rang the doorbell. A young lady walked out onto the second floor balcony. “Is somebody here waiting for a raccoon?” I asked. “Yes. Did you touch it?” That question again. Same answer.

Very long story shortened somewhat: The Conservancy is permitted to care for injured and orphaned wildlife native to Florida. They have some guidelines for rescue and transport:

• Place a towel over the animal; place it in a box, in a warm, dark, quiet place.

The Conservancy was already caring for 3 baby raccoons and was happy to add a fourth. And, I was happy … hmmm … to go back and finish cleaning my bow pulpit.