Queen Mary Thanks YOU 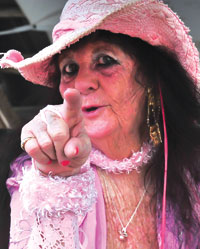 Queen Mary would like to personally thank all those who supported her at Stan’s in Goodland on Sunday, November 17. The Gober family and many of its patrons considers her family. They went out of their way to hold a 50/50 raffle to help pay for medical expenses after Queen Mary suffered a minor heart attack, fell and fractured her hip only a few weeks ago.

A special thanks goes out to Stan’s for holding the event, as well as Victoria Wright and Gary Krist and Jeff Hilt and the Stampede Band.

Victoria Wright, a well known photographer in the area, donated two large photos to be raffled with all proceeds going directly to Mary. Gary Krist and his family’s vegetable stand set up at Stan’s on Sundays offered $5 off any produce purchase with the purchase of $25 or more in raffle tickets. Jeff Hilt and the Stampede Band played on Sunday, and Jeff acted as “master of ceremonies,” keeping the audience aware of the raffles and produce bonus to benefit Queen Mary.

A thank you from Queen Mary also goes out to Bill and Pat Holmes, Martine Schroeter, members of the Kiwanis for volunteering their whole day to sell tickets, and to “KFC Paul” for his constant support.

To date, over $3,000 was collected and will help cover medical expenses. It is not only the financial support which touches Mary’s heart, but also all of the loving and sincere wishes of recovery she received from the many people she has met over the years. Queen Mary stated she felt truly loved.

Stan’s has always been known for its tradition of supporting the local community and charities in need. That tradition of unconditional love created by Stan Gober carries on through the work of his son Steve. His father set a fine example. So, to Steve and Trish Oehler, Queen Mary thanks you from the bottom of her big and loving heart.

A second fundraiser for Queen Mary is in the works for either January or February of 2014.

One response to “Queen Mary Thanks YOU”