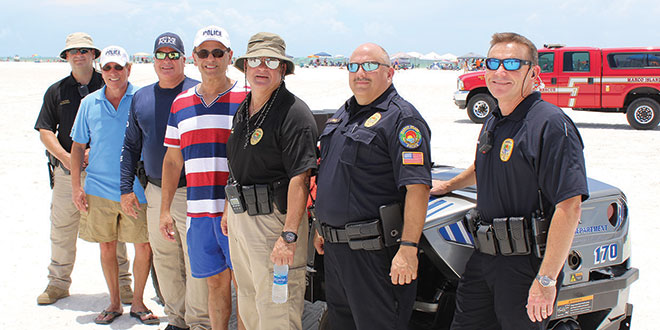 “We’re really excited about having it,” said Marco Police Chief Al Schettino. “It’s a great asset to the department. What it allows us to do is gain access to beach areas that were inaccessible at high tide. We can go all the way down to Coconut Island and Sand Dollar Island now because we can reach them by land. We 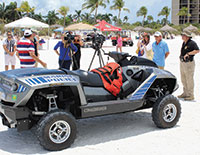 can also reach them by water. It’s an amphibious vehicle that allows us to use it on land or on water for an emergency rescue situation.”

Battaglia said the decision to donate his Quadski, valued at $50,000, was sparked by his observing a passing patrol car while he was at the beach one day. “I started thinking, wouldn’t it be nice if they had one (a Quadski) like I have that could be used for search and rescue,” he said.

He subsequently called Marco police and asked whether there was an amphibious vehicle in the department’s motor pool. “They said, ‘No,’ and here we are,” Battaglia explained. “They say you 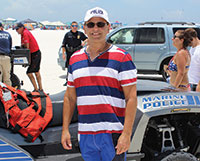 Phil Battaglia and the 2015 Gibbs Quadski XL he recently donated to the Marco Island Police Department.

can’t place a price on human life, so it’s well worth the money if it can save one life.”

The Quadski has already been used on a rescue call when the police received a report on the evening of July 3 about an unconscious man in the water off of South Beach.

“Our marine officer, who was off the boat at the time, deployed it from the station and went out there to check on him,” said Schettino. “It just so happened that he was OK, and just out there swimming and floating. But he was able to get to that person immediately and address the situation. So it came in handy immediately.”