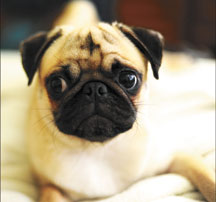 This column is the opinion of a 3-year-old African Grey Parrot named “Simba” who has an extremely high intelligence level. While he does not possess a degree from any college or university, he does have a strong opinion of himself and feels that he is the best candidate to answer the complex questions of today’s discerning pets…and the humans they own…

I must say I thoroughly enjoy reading your column. Since my human has finally finished renovating his condo (and consequently relocated the computer) I am now able to write to you. My name is “China” and I am a fluffy (NOT fat) female Pug. I have a seemingly strong issue with my older Pug brother “Fuji”. When Grandma wants to take us out for a brisk walk I am right there at the door ready to get my harness on and do what I have to do. Fuji on the other hand decides it’s time to play with toys and run around the condo acting like a total idiot! I’m starting to get a bit annoyed at him because Grandma is on a schedule and things need to be done accordingly. The other day I got so annoyed with Fuji that I walked over and ripped the toy out of his mouth threw it on the ground and stated that, “Enough is enough.. Let’s go!” Dad got a kick out of this and thought it was funny…I personally was very adamant about the situation. We finally got out the door with Grandma for our walk and then for dinner we had filet mignon. I don’t understand why, with such obtrusive behavior, that Fuji was rewarded with a filet. I’m the good dog…he’s the brat! He should’ve been eating kibble for dinner. What is there to do with my brother? He’s been acting like this since we were pups. It’s time that he grows up and starts acting like an adult!

Signed, At My Wits End

…Or should I say “Your Highness”… Relax and unbuckle the straps that have you so wrapped up! Be thankful your older brother still acts like a pup. You need to let your hair down sister and have a little fun yourself. Life is too short to go around being serious all the time. If your brother wants to run around and give dear ole Grandma a hard time then let him (within reason of course). Why concern yourself with his behavior as being bad? Maybe you should join him in his escapade. You might find yourself having fun, too (oh dear…what a tragedy that would be).

All I’m saying is to lighten up a bit. As far as the filet mignon is concerned, kudos to Grandma! There aren’t too many domesticated pets that get the best cut of steak for dinner. The Administrative Assistant is Vegan so you can imagine what we snack on! But our Grandpa is the best! He chops up steak, chicken, lamb chops and the occasional rib for us…our Grandpa rocks! Even though Zazu (my macaw sister) screams at high decibels and Chloe (my Cockatoo sister) never stops talking, they still get all the treats from Grandpa.

They may drive him crazy with all the chatter and screaming but when you have multiple pet households it’s not fair to give to one without the other. Besides, you dogs have the attention span and the memory of a wet mop so it doesn’t pay to discipline you five hours later for something you simply won’t remember that you did wrong.

So, in closing to answer the question… if Fuji isn’t causing any harm and Grandma is having fun watching him run around during walking time, then let him

do it. If he’s your older brother it will be a memory you want to keep. Not the one of you scolding him all the time. Life is what you make of it. To quote one of my all time favorite actresses, Katherine Hepburn once said, “If you obey all the rules… you’ll miss all the fun.”

Simba is owned by Christina Giordano. If you have any questions you would like Simba to answer, please email them to: Ask Simba@angelsofflightproductions.com