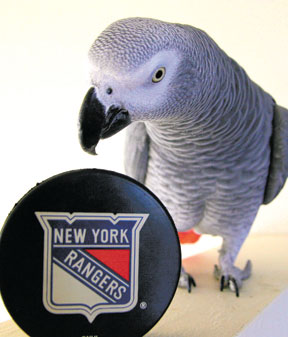 This column is the opinion of a 3-year-old African Grey Parrot named “Simba” who has an extremely high intelligence level. While he does not possess a degree from any college or university, he does have a strong opinion of himself and feels that he is the best candidate to answer the complex questions of today’s discerning pets…and the humans they own…

Well it’s here and there is no way to stop it…Hockey Season! I’ve got an issue with this because every year in mid-October, my girlfriend seems to forget she has a boyfriend (unless you count the 6 guys on the ice that are slapping a puck around). I tried last year to get into the game but I’m a football fan. Hockey is a fast moving game and hard to follow, but I must find a way to get my girlfriend to back away from the TV and realize I’m still here during Hockey Season. Any suggestions?

Ahhh, yes! Hockey Season!! That’s bigger than Christmas around here at my humble abode. The Administrative Assistant lives for Hockey Season! It’s a very intense game and I must say after watching a few games with her last season, I found it to be quite an intelligent game (I thrive on intelligence).

Although I must say at one point last year during the New York Rangers vs. Washington Capitals game (she’s a huge New York Rangers fan), I was sitting on the couch watching the game with her and all of a sudden the Rangers scored a goal, she jumped up and started hooting like a banshee, startling me, then I went flying across the floor and wound up sliding right between 2 chair legs. I had to remind her that I am not a hockey puck and the goal I made with my body was not official! If you’re not careful these female hockey fans can get crazy during a game.

That being said, try looking at the game as a battle of wits and endurance. These guys are skating upwards of 20 mph and they don’t stop unless they are switching offense to defense. They have to be aware of everything around them even while skating backwards. It is one of the most physical sports played and the intelligence levels of the game far out weigh any other sport, statistically speaking.

If you have only seen a game on TV, try going to a live game. It is much more intense and you can follow the game better as well as the puck. I agree that trying to follow a little black spec on the telly is a bit difficult. Take your girlfriend to a Florida Everblades game one night. You’ll see the fans there are die-hard when it comes to hockey (you might even see the Administrative Assistant singing the National Anthem one night before the game). You’ll get so wrapped up in the first 15 minutes that it will become an addictive sport for you to watch.

Hope this helps you out a bit. If you still can’t get into Hockey after watching a live game, just buy the girlfriend a Wayne Gretzky jersey and wait out the season… she’ll come back around after the Stanley Cup is over. Good luck!

Simba is owned by Christina Giordano. If you have any questions you would like Simba to answer, please email them to: Ask Simba@angelsofflightproductions.com