This column is the opinion of a 3 year old African Grey Parrot named “Simba” who has an extremely high intelligence level. While he does not possess a degree from any college or university, he does have a strong opinion of himself and feels that he is the best candidate to answer the complex questions of today’s discerning pets…and the humans they own…

I was walking South Beach on Marco the other day. And saw a very intriguing site. A fisherman was catching bait fish and the girl who was with him was actually feeding a few of the fish to the seagulls and egrets by hand! When I asked her if she was nervous about doing that she responded, “Not at all. It takes them about 15 to 20 minutes to realize that I’m the one with the goods but eventually they trust that I won’t hurt them.” We proceeded to talk about birds in the wild and how they “forage” for food, their bond with each other, etc. She seemed to know a lot of information on different species.

What I’m curious about is if once you hand feed these beach birds do they always come looking to be hand fed? I see people feeding the birds on the beach all the time. Sometimes they even attack the food while the person is swimming in the Gulf. I would venture to say that a bag of potato chips can’t be good for them. And doesn’t it disrupt the balance of nature?

Haha!!! There is only one girl on Marco Island whom I know who can feed seagulls and egrets by hand and who has that kind of knowledge of birds! My human/Administrative Assistant! Hmmm…I must have a talk with her. While she’s supposed to be working for me, she’s off at the beach soaking up the sun! But that’s another column to write!

Anyway, to answer your “curiosity” in as 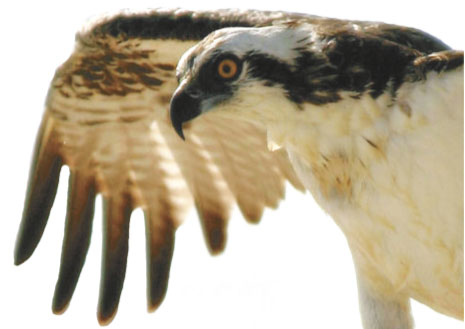 plain terms as I can, Christina applies food management and operant conditioning in small amounts to the wild birds as she does us in large amounts at home. The definition of operant conditioning according to Wikipedia is, “a form of psychological learning where an individual modifies the occurrence and form of its own behavior due to the association of the behavior with a stimulus.” In this case the stimulus is bait fish. There is even a crow that sits on the sliding glass door sill and knocks at the door with his beak every Sunday morning. He only gets the bird feeder filled once a week. She has worked with several avian species from the smallest parakeet to the Andean Condor (I wasn’t around for that session…he had a 12 foot wing span…mine is 18 inches!) While fishing and catching bait fish, the beach birds tend to look for scraps anyway. A few fish snatched out of her hand every month or two will not change them into pets so the balance of nature can remain as stable as it has been (however, I think she might want to bring some of that fish home and cook a meal for me!). The key to working around wild birds is to act slowly. People who rush up to get a picture are so upset when the bird flies off and they have missed that perfect shot. The picture of the Osprey in this column is proof of that. She took about 10 minutes working very slowly and never looking him in the eye until the photo was actually taken. In the end she was about a foot and a half from the Osprey.

And to answer your last question…Yes! Potato chips are very bad for birds! Although I tend to be very fond of them.

Simba is owned by Christina Giordano. If you have any questions you would like Simba to answer, please email them to: AskSimba@angelsofflightproductions.com