Pythons and Gators and Crocs, Oh My! 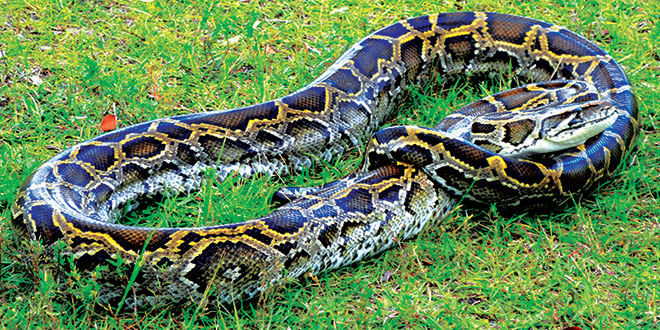 This 13-foot Burmese python is very visible in an open field, but well disguised when it reaches habitat shrubbery and trees.

Join Bob on March 8th at 7 PM at the Marco Island Historical Society’s (MIHS) Rose Auditorium for a presentation about the 2016 Python Challenge results and an update on area dolphin activity. Also, there will be a baby gator and baby crocodile on hand so you can compare the differences of the two species. All area school students and MIHS members are free, and a $5 donation would be appreciated from others. January’s event sold out – so come early to get a good seat!

Burmese pythons, alligators and crocodiles…Believe it or not, all three of these species call Southwest Florida home. Today we’ll take some time to discuss what they are, and why they are in our area.

Burmese Pythons: How this non-native snake came to wild Florida is not exactly known. It would be reasonable to assume that people who owned them as pets eventually released them in the Everglades as they became too large to keep. Also, there was a breeding facility on the east coast that was destroyed during Hurricane Andrew and speculation is that many escaped at that time as well. Their numbers have grown to epidemic proportions, having a negative effect on native bird and animal populations.

This is one of the largest snakes in the world and, here in Florida, some have grown to be 18 feet in length, weighing more than 120 pounds. Their tan color provides excellent disguise in the wild, and the dark markings on the sides and back allow them to blend into many area habitats. I’ve watched one slither from an open grassy area to the base of a tree and virtually disappear before my eyes into the surroundings.

It is guesstimated that they originated on the east coast, but more than 90 sightings were reported in Collier County in 2015. It seems only logical that they are eating their way across the state. As mammals and birds become scarcer (raccoon and possum populations are down by 90% in some areas), the pythons appear to be working their way to the west. The need for food and subtropical climate indicates that they will not turn north until the lack of food dictates that they do so.

Adult pythons have very few predators, with the exceptions being alligators and humans. The numbers are growing and, unfortunately, it seems hopeless that they will ever become completely eradicated from South Florida.

Let’s create a scenario to estimate how many might be 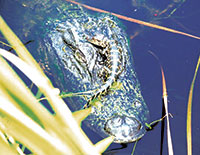 A baby gator is protected by its mother, resting on her head, near the Big Cypress Boardwalk.

Now, there are a few factors that we did not factor into the above numbers. First of all, not all of these snakes will make it to maturity, but that attrition rate is not known. Secondly, 20 of the 40 eggs produced may not be female. It may be less. But suppose it is more? The estimates that I have heard recently are anywhere from 10,000 to 150,000 pythons in South Florida.

The state’s recent 2016 Python Challenge netted just over 100 catches or kills, but the awareness factor is now more prevalent than ever. It is important that people know that they are here and that sightings will become more common.

ALLIGATORS: You just have to take a short drive down Route 41 towards Everglades City and you can find gators basking in the sun or cooling off in the area canals. They have been on the earth for millions of years and are native to Florida. Their range extends as far north as North Carolina, and as far west as southeast Oklahoma and into eastern Texas.

They rely on external sources of heat or cold to regulate their body temperature. Optimal body temperature for these reptiles is about 80 degrees. When the air temperature is too warm, they will drop into area waters to regain that temp. When they are too cool they emerge from the water to enjoy the warmth of the sun. The term for this behavior is “ectothermic.”

One thing unique about the alligator is its heart. While most reptiles have three chambers in this organ, alligators and crocodiles have four. This allows for more efficient respiration.

Cathy, Bob’s wife, successfully positions a Burmese python for capture during a training session for the recent 2016 Python Challenge. PHOTOS BY BOB MCCONVILLE

the young from predators for about one year, but only 10% will survive to full maturity (about 7-feet in length). The baby gators are food for otters, wading birds, raccoons and some fish. One of the most significant mortality factors is cannibalism.

Alligators are found primarily in fresh waters and crocodiles are more at home in salt water.

CROCODILES: Not too many people are aware that we have American crocodiles living in South Florida. There are only about 1,500-1,800 that call this area home, ranging from Lee County down to the Florida Keys. Found mostly in the coastal Caribbean waters, Florida would be their northernmost boundary. There are at least two known nesting areas in Collier County.

They prefer saltwater habitats or brackish waters (a mix of fresh and salt). Because of extensive canal systems they can sometimes be found in a few inland areas as well. One advantage that the croc has over the gator is that it possesses a gland to secrete salt. This helps it to tolerate its habitat.

There are several ways to tell a gator from a croc. The crocodile snout will be more tapered, while the gator snout is rounded. Also the fourth tooth on the lower jaw of a croc is more pronounced, sitting on the outside of the jaw.

Unlike the female alligator that protects and cares for her young for an extended period, baby crocs are on their own within a few days or weeks. Like the gators, the survival rate is small with cannibalism being a main factor.

Pythons and gators and crocs, oh my! Three reptiles that can be found in our area; all have very few predators when fully grown, and all should be approached with extreme caution. Although dangerous they are all beautiful in their own ways. Enjoy…from a distance!

BIO: Bob is a naturalist for the only South Florida dolphin survey, onboard the Dolphin Explorer. As a member of Florida SEE (Society for Ethical Ecotourism) he emphasizes the practice of proper education regarding area wildlife. Bob loves his wife very much!

Out With The Old, In With The New… In NatureHawks and Falcons In Our Sky