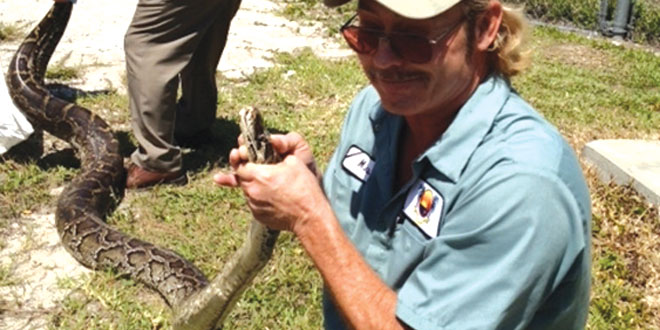 At around the same time as an endangered leatherback sea turtle was being rescued, a heavily invasive species – the Burmese python – was just being discovered under a valve cover box on Mainsail Drive.

Lawn care workers opened the valve cover to find a large, shiny snake coiled up at the bottom of the box. Mike Gee, an employee at the Marco Shores Wastewater Treatment Plant quickly identified it as a Burmese python. According to the city, Gee is a collector of snakes and well-versed in species of reptiles and exotic pets who identified the snake to be a female in the process of molting her skin due to her behavior and the look of her eyes. 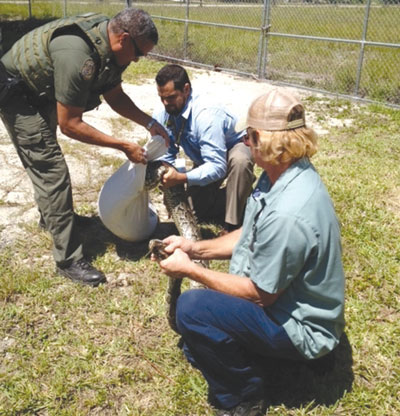 FWC, Chris and Mike start to bag the python.

Not long after their arrival, FWC came onto the scene as well, ready to handle the situation.

As Richie accounts: “When he opened the door to the cover to show us, there it was all coiled up! Huge! With a small sack and hooked pole, he approached the coiled snake, which quickly uncoiled looking for its escape from the box.

Mike quickly grabbed its tail and pulled it out of the box – it looked to be 12 feet or greater! He had it by the tail then jumped on it grabbing its large head! The tail was coming awfully close to coiling around Mike’s leg so Chris Sparacino jumped into action and grabbed the tail.

The snake was under control! With the FWC 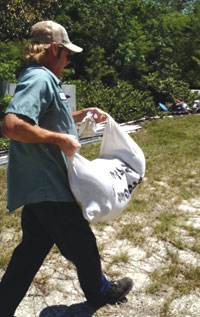 officer, the three of them stuffed the entire snake in a bag, tied it up and hauled it off. Mike carried the bag and said it was easily over 100 pounds!”

The snake will be scanned for a microchip that could identify its owner but most likely it will be euthanized and autopsied for research. Pythons are said to be taking over the Everglades in massive numbers. Many more are being reported in East Naples as well.

Luckily, Richie had a good crew with her to tame the large constrictor. “Mike and Chris were very impressive how they handled and controlled the python! If I get anymore snake calls, they are definitely going to be there!

If you see any pythons (live or dead!) or any lizard over 12 inches, please call immediately: 1-888-IVE-GOT1 and report online at www.IveGot1.org.