Putting – Beyond the Mechanics 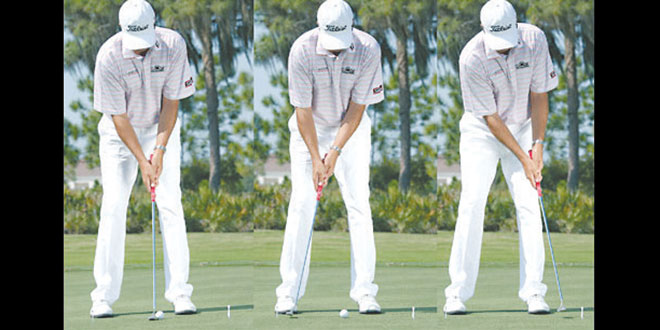 Set two tees down on the target side, and behind the golf ball, both tees equal distance from the ball. Make a few strokes from a distance that the back and forward swing would be approximately where the tees are. No target is needed for this drill. Checkto make sure your backswing is not shorter than your forward stroke. SUBMITTED PHOTO

There are many myths being told between playing companions. One of the sources that keep the myths going is the TV announcer who is in the booth analyzing professional golf tournaments. Many of these TV personalities played golf in the 80’s and 90’s, and have really not been around instructors, new technology, and other educational sources since then. They seem to still use the same sayings that were popular before new technology tools have proven, or disproven these common phrases.

One example of a common phrase that has been proven to be incorrect is: “he/she decelerated through that stroke.” This phrase could be used on every stroke on the PGA tour. The best players, and more specifically the best putters, in the world decelerate the head of the putter slightly as they are coming into impact. Machines, like the SAM’s Putting Lab, are telling us that a common trait in a great putter is that the putter head slows down around impact. Jordan Spieth, the number one player in the world, and one of the best putters on the planet, decelerates at impact as much as anyone on tour.

Let’s talk about why there is some deceleration. Obviously, I cannot speak for all the great putters, but in my opinion they are not trying to decelerate through impact. The biggest reason they are decelerating is that they are taking a backswing, and then they are not forced to add speed to the putter head on the forward swing.

Many amateur golfers, on putts longer than 10 feet, take a backswing in which they must add speed in order to hit the golf ball the desired distance. This abrupt acceleration makes it difficult to be consistent with speed control. The majority of the best putters in the world have backswings that are longer in length than the forward swing.

Hitting the putt solid is the most important aspect of being a good putter. Having a short backswing and adding acceleration through impact makes hitting putts solid a tough task, and makes consistent speed control almost impossible. It is best for a player to adapt to different distances by changing the length of the entire stroke. Many golfers have one length backswing, and many different forward swings. Golfers should focus on making solid contact, and making the pace of the putter head an even speed back and through. This will help make more putts, and leave the misses right next to the hole.

If you are someone who miss-hits putts, or tries to accelerate the putter on the forward swing, go see your local PGA professional for help.

Todd Elliott is the PGA Head Golf Professional for Hideaway Beach. Todd is TPI (Titleist Performance Institute) Certified as a golf professional. This gives him the ability to give golf specific physical screening to detect any physical limitation that might affect the golf swing. Todd is also a Coutour-certified putting fitter, a Titlteist-certified fitter and a Titleist staff member. Follow Todd on Twitter @elliottgolfpro or for any question or comments email telliott@hideawaybeachclub.org.