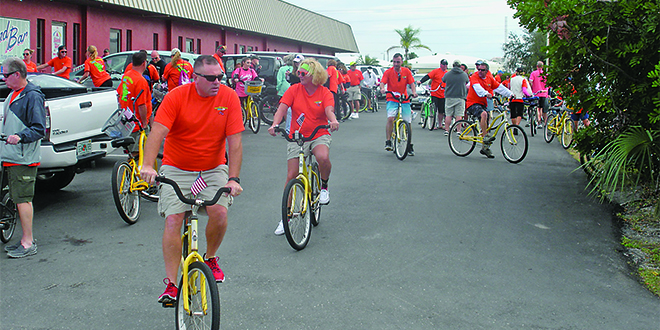 Photos by Don Manley:Above: Riders leaving the Sandbar at the start of the 2016 Tour de Taverns.

The question, “What brings you out today?” prompted a quick and succinct response from Ronald Drake. “My girlfriend does,” Drake chuckled as he relaxed atop a bicycle recently. His girlfriend, Tina Carano, was next to him astride a bike of her own. “She’s talked about this for years and now I’m going to do it.”

He was referring to the Tour de Taverns Bicycle Poker Run, an annual charitable event that raises funds for a local resident suffering from a serious illness. It was Drake’s first time participating in the cycling jaunt that took riders from the Sand Bar to The Crazy Flamingo, then on to Rookies Bar & Grill, CJ’s On the Bay, the Snook Inn and the Old Marco Pub & Restaurant before concluding at The SpeakEasy.

For a $25 entry fee, riders got a commemorative T-shirt and selected a playing card at each of the seven stops. The person who finished with the best seven-card-stud poker hand collected $100 at the The SpeakEasy where there were raffles and prizes as well as a festive gathering to end 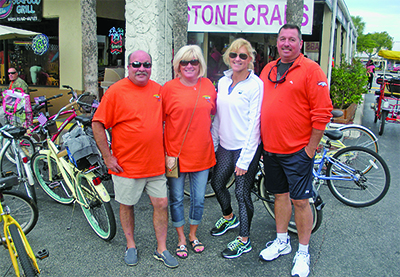 Carano was a relative veteran, having also taken part in 2015. This year, she and Drake were at the Sand Bar, bright and early on a Saturday morning for the event’s start. Carano was full of anticipation given the great time she had last year.

What appealed to her the most about that initial experience was everything she said with a laugh. “The bike ride, the drinking, the people, the party afterward at The SpeakEasy—that was fun.” Carano added, “ I’m looking forward to the SpeakEasy at the end.”

The SpeakEasy co-owner and Tour de Taverns founder, Jimmy Boylan, was overjoyed to have set a new participation record with 231 riders, up from last year’s previous record of 216. He was also elated with establishing a record amount of money, $16,460, as compared to the $9,000 to $11,000 that’s been generated over the last five years. “I’m real happy with the results,” said Boylan. “Elated!”

At The SpeakEasy, the late afternoon vibe was festive. The dance floor was jammed with people enjoying tunes provided by DJ Johnny Fusco and an empty seat 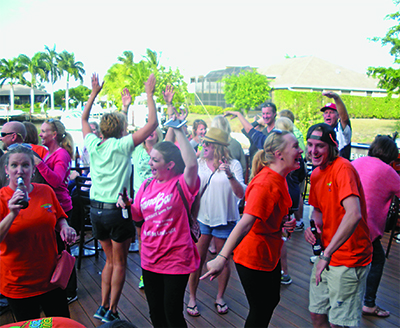 Sam and Jake Clifton (r), burning up the dance floor at The SpeakEasy after the 2016 Tour de Taverns.

or table nearly impossible to find.

“Love it,” said Boylan, as he surveyed the crowd. “Look, everybody’s having a good time.”

Doug and Julie Klooz were among those who’ve taken part in every Tour de Taverns since the event began in 2009.

“It’s a great thing to do for the people that need it and we enjoy it—the biking and helping people in need, especially this year,” said Doug Klooz, while enjoying the fun at the tour’s second stop, the Crazy Flamingo. “The person they’re benefitting this year s Lisa Mayfield. We’ve known her forever. We’d actually left town and went home to Indiana for a week to visit family and we came back just so we could do this.”

Mayfield said she’s been overwhelmed by the community’s response since she was stricken with cancer. “These people, they have done things for me that I didn’t even think I needed and it’s without asking,” she said. “They show up, they make sure I have food, they make you feel safe and loved, and that’s important when you’re sick and living alone. The support system on Marco is amazing.”