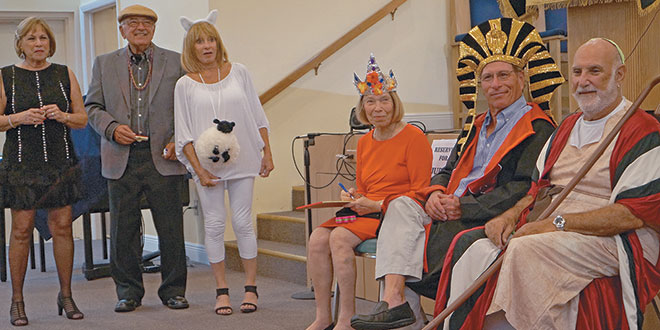 (Standing) A three-person team of kazoo players listens to their competition. Seated, from left, are judges Sue Baum, Roger Hernstadt and Larry Sacher.

On March 23 Rabbi Mark Gross led the Jewish Congregation of Marco Island (JCMI) in a “Midweek Madness” Purim celebration like never before. Masterfully woven through the joyous singing, dancing and even a kazoo contest, were deeper messages, such as our personal responsibility to act against injustice.

Costumed guests filled the JCMI social hall. For the un-costumed few, colorful masks, beads and hats were shared. The evening began with a Feast of Esther – Hearty meatloaf and potatoes prepared by the JCMI chefs, washed down with wine, and finished with hamantaschen, traditional Purim cookies.

Following dinner was a Purim service unlike any other- with music (including calypso), teams of competing kazoo players, a costume contest, noisemakers, and jokes. Lots of jokes.

On first blush Purim seems to be little more than a Jewish Halloween, with the added encouragement for adults to drink and everyone to make a lot of noise. But behind the festivities is the remembrance of a defeated plot by the evil Haman to exterminate the Jewish people, and the recognition of the heroic Queen Esther.

At the JCMI, and worldwide, Purim is observed by reading the biblical Book of Esther (the “Megillah”). Services everywhere are noisy because when Haman’s name is read, congregants “blot” it out with noisemakers.

Rabbi Gross, dressed as a blue crayon, and Cantor Hari Jacobsen, as a coloring book, led a fun, energy-filled Purim celebration, yet still made all in attendance think and reflect on many important issues. The symbolism of the holiday masks to Esther hiding her true identity, and the other figurative masks people hide behind. That God’s divine intervention may come through the actions of humans. The dangers from acculturation/assimilation when one’s true identity becomes lost. To not be a bystander- but to act when it is the right thing to do, even if it would be easier (and safer) to do nothing.

The story of Esther is particularly beloved by women for its recognition of female strength and courage. Rabbi Gross noted feminism’s early stirrings in this biblical story, not only with Queen Esther but also with her predecessor Queen Vashti, who stood up to the King and refused to be publicly humiliated. Queen Esther revealed herself as a Jewish woman and risked death to save her people. She was aptly described by Rabbi Gross as “a heroine brave enough to take off the mask 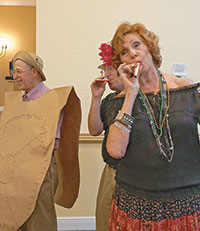 A competition by kazoo players was a Purim first.

With all these serious messages, one may wonder how Purim remains such a happy holiday. Read the story, look at history, and it becomes clear. Purim’s joy is found in its timeless affirmation that the Jewish people did, and will, survive.

The Jewish Congregation of Marco Island holds Shabbat services every Friday evening at 8 PM, followed by an Oneg Shabbat. The JCMI is located at 991 Winterberry Drive. For more information visit their website at www.marcojcmi.com or call 239-642-0800.

The Story of Purim

Esther was a beautiful Jewish woman living in Persia. She was raised by Mordecai, who is described in various Purim stories as either her cousin, or her uncle. Born with the name Hadassah, she later presented herself as “Esther” in order to mask her Jewish identity.

Queen Vashti was married to King Achashverosh. During an extended feast the King gets drunk, and orders Queen Vashti to display her beauty before the guests, wearing only her royal crown. When she refuses, Vashti is removed as queen. The King then orders that his kingdom present all the beautiful young women to him so he can choose Vashti’s replacement.

Following a beauty contest (or after being chosen from the King’s harem, depending on who tells the story), the beautiful Esther is chosen by King Achashverosh to be his new queen. The King did not know that Esther was Jewish because Mordecai had told her to keep her Judaism secret.

Purim’s villain is Haman, King Achashverosh’s trusted advisor. Haman hated Mordecai because Mordecai refused to bow down to Haman. This was the spark for Haman’s evil plot. When King Achashverosh relegated the fate of the Jewish people to Haman, he made plans to exterminate them.

When Mordecai learned of the edict to kill all the Jews in the kingdom, he went to Esther to persuade her to speak to King Achashverosh. This would put Esther in grave danger, since she had not been summoned by the King, an act punishable by death. She would also have to reveal her true identity as a Jew, at a time when all Jews had been sentenced to death. Esther fasted for three days before approaching the King. She bravely told him she was a Jew, and told him of Haman’s plot against her people. The King lifts the edict, and orders the execution of Haman and his ten sons. Esther’s actions ultimately saved the Jewish people from genocide.