PUFFIN LOVE: Atlantic Puffins of Maine with a Marco Connection 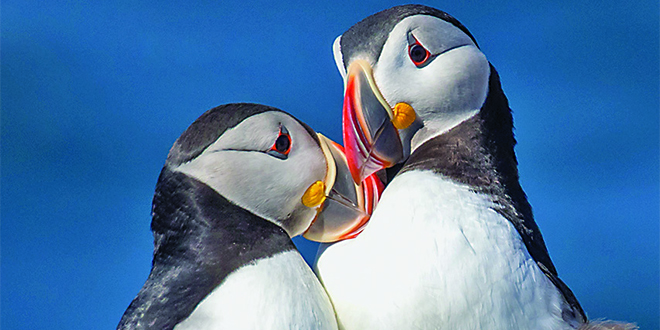 Photos by: Jean Hall |And they call it “Puffin Love.” Rubbing of bills (billing) is part of puffin social interaction during courtship.

Atlantic Puffins are often called “sea parrots” due to their flashy bills of red, yellow and blue during mating season. They have earned the moniker of “clown of the sea” with tears of clown markings on their oversized faces.

From a distance, puffins can resemble the dark-tuxedoed penguins. Puffins are small seabirds measuring 10 inches from their beak to the end of its blunt tail.

Steve Kress, founder of Audubon’s Project Puffin, refers to the Atlantic puffins as “all-purpose birds,” as they are excellent swimmers, sleek flyers and skilled hunters. They can dive 20 feet, burrow like groundhogs and scamper over rocks.

In the early 1800s, Atlantic Puffins were almost extinct along the Gulf of Maine. They were victims of fishermen who hunted them for their meat, fat and feathers. In 1973, Kress and his team from the National Audubon Society pioneered Project Puffin, a cutting-edge seabird relocation project to reestablish a puffin colony on Eastern Egg Rock (EER) Island in Maine.

EER is a seven-acre windswept isolated rock island located in outer Muscongus Bay, six miles east of New Harbor, Maine. It was an ideal nesting habitat for the Atlantic puffin. Over a period of eight years, Kress and the Project Puffin team transported downy pufflings from Newfoundland to EER, with the hope that the pufflings would think EER was their home and eventually return to breed.

Atlantic puffins slowly returned, but it wasn’t until 1981 that proof of breeding was confirmed. After 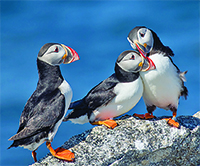 A collective noun for a group of puffin is a “circus” of puffins.

Jean Hall, project manager of Marco’s Owl Watch Program, spent two weeks at EER in July as a Project Puffin volunteer. Along with the crew of intern biologists and scientists, Jean monitored the puffins behind bird blinds. Her duties included taking photos of adults flying in with fish, counting and noting the types of fish, and recording time adults left and returned to the burrows. She also weighed and measured pufflings and re-sighted banded birds.

Jean’s experiences at Project Puffin have strong ties to Audubon’s Shorebird Stewardship Program in Collier County, which includes re-sighting of banded birds. According to Hall, “You get a better understanding of how global bird populations are, and we see many of them here on Sand Dollar Island.”