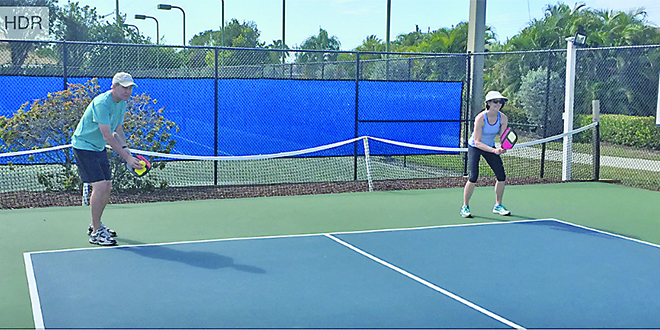 Photos by Wayne Clark |A left- and right-hander team properly set up for serving, to encourage forehands on the third ball strike opportunity.

In all sports, we need to make sure that we are properly positioned to allow ourselves to efficiently and effectively execute a strategic game plan.

In previous columns, I have discussed my belief of the need for proper fundamentals with both the serve and the return, as well as the fact of how important I believe these two shots are.

As a tennis player, serving in doubles, I will traditionally position myself about three quarters of the way out to the singles sideline to serve. I am positioning myself there because my partner is already in the net position and should be covering at least two thirds, if not three quarters of the court with their volley, which is opportunity that is not given to us as a serving team in pickleball. I am also in this position to be able to get to a possible wide return of serve into my doubles alley, which is something I don’t have to worry about in pickleball, because there is no doubles alley.

As a returner in tennis, I will usually position myself standing, pretty much in the middle of the width of the service box. I need to position myself here, because, due to the size of the service box, as well as the overall size of the court, and the speed of the bounce and flight of the tennis ball, I cannot afford to give up too much space on either side of my forehand or my backhand.

However, in pickleball, because the service box, as well as the overall size of the court is smaller, and the fact that the speed of the bounce and the flight of the plastic pickleball is not traveling as fast as a tennis ball, I am able to compensate for that by adjusting my position in relation to the width of the smaller service box.

So here we go.

As a right handed player, in pickleball, for both the serve and the return of serve, I want to position myself more to the left side of the service box. Lefties, you would shift to the right.

This now opens up the court to mostly being my forehand side, without giving up any strategically sound positioning of my court area.

This position will allow/encourage/promote an opportunity for me to hit a forehand, without giving up any open space on the court.

This forehand opportunity now allows me, as the returner, to be able to be more consistent and aggressive with the placement of my return. Remember, different than in tennis, the server in pickleball only gets one serve, so there is just not as much opportunity for the server to try to ace me with a big serve.

Along with that, as the server/serving team, this forehand position, allows me the same opportunity to hit a forehand on the third ball opportunity.

One of the drills I encourage players to work on in my practice and play clinics at the Marco Island Racquet Center, aka, “The MIRC,” is to position themselves, as I have described, and work specifically on the first three shots of the point; the serve, the return and the third ball strike. Each player takes several turns at each position. You do not play out the point. You are hitting only the first three shots. The main purpose of this drill is to become very proficient and efficient at these first three shots! I believe that these three shots need to be in at least 90% of the time. There is no reason we should not be consistently making these shots!

In addition to the main purpose of this drill, players should utilize these practice sessions to become aware of how difficult it is to be able to get a ball to your opponent’s backhand side, simply because of their positioning on the court. Then utilize that knowledge, to take advantage of your opponents, who have not read my column, and are in improper positioning, and are inviting you to go to their backhand side.

Wayne Clark is a certified professional tennis instructor with over 25 years experience coaching players on all levels of the game. Wayne is also qualified in pickleball instruction. He has been the head instructor at The Marco Island Racquet Center since 2001. The Racquet Center offers clinics, private and group lessons for both tennis and pickleball. Coach Wayne’s Island Kids Tennis juniors program runs year round and has classes for players from kindergarten through high school. Contact Coach Wayne by email at coachwayneclark@aol.com by phone or text at 239-450-6161.