Promise Me: How a Sister’s Love Launched the Global Movement to End Breast Cancer 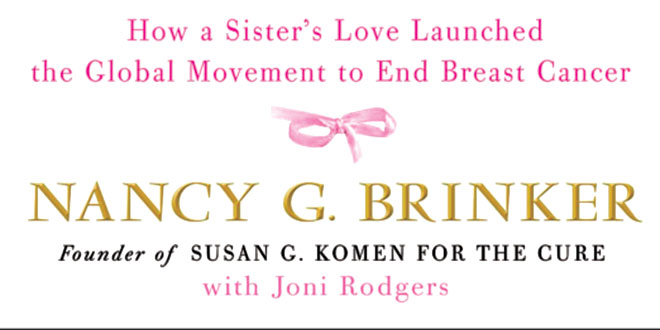 The first National Breast Cancer Awareness Month was observed in October 1986, and now it is a global event. Promise Me is the story of Susan Goodman, her younger sister Nancy, and how their sisterly devotion brought that about.

Three-year-old Susan welcomed home baby sister Nancy Goodman in 1946 with an intense looking-over and accepted her with, “Well, she’s quite a character,” announcement to their parents. The sisters lived in Peoria, Illinois, an area I know very well as I was born (a little after Nancy) and raised about 80 miles south of there in Springfield. Nancy’s description of their solid, loving, successful middle class family in Central Illinois post WWII is very heart warming and very familiar. They had a secure existence and also a happy one. Their father Marvin was what was called in those days “a good provider” (real estate developer). Their mother Eleanor was a wise, caring, generous woman with deep empathy for others matched only by her dedication to doing small acts of charity every day to better life for someone else. They were well loved, well tended and taught to seek ways to be of service. Both Goodman girls learned this lesson very well.

Susan was the beauty queen, effervescent, kind to everyone, eternally gracious and poised, while Nancy was tall, tomboyish and sometimes socially awkward. They were as devoted to each other as sisters could possibly be. There are a couple of chapters covering their trip to Europe that were my favorite part of the book – so well written that I felt I was there with them. I could feel their love for each other and exuberance for life at that time, radiating off the pages. I swear I could smell those baguettes! They made plans to come back to Europe with their parents, to have families, and to grow old and become grandparents together.

After college, Susan made her way back to Peoria where she eventually married a former college boyfriend, Stan Komen. Susan immediately went to work making a home and a family and enlarging her already huge circle of friends. After realizing they could not conceive, they adopted two children. While her son and daughter were still very small, Susan’s breast cancer was discovered in 1977. Her battle lasted for three years and Susan died on August 4,1980. The ordeal of Susan and her family are eloquently described in Promise Me.

The first part of the book is mainly devoted to Susan’s story, of course. But, also the authors give us a brief history of breast cancer dating back to the Egyptians in 1600 B.C.E. Those of us 50 or older will remember that in 1977, when Susan was diagnosed, body parts were not mentioned in polite society. Using the term “breast” was avoided and it was referred to as cancer or perhaps women’s cancer. I did not know until I read this book that 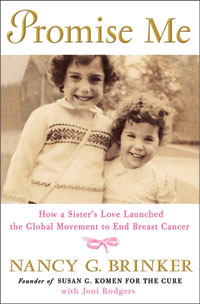 Judy Holliday died of breast cancer. She and her publicist hid that information from the studios and from the public, such was its power. I remember as a teenager and young adult in the 1960s and 1970s people dancing around that term, not just breast cancer, but cancer itself – as if the word itself had some mysterious power. There were some who refused to acknowledge that family members had cancer and they would say only that they passed away from heart problems. I worked as a candy striper during my high school days and not just family members and patients, but doctors and nurses would refer to the patient’s “condition.” Brinker captures that era’s attitude accurately in Part One of the book.

Part II is the saga of how Nancy Goodman turned her grief and rage into service for others. She wanted women to have education and access. Education about the disease and their options for treatment, and access to the options they chose for themselves. Her sister’s story had shown that even with access to the best medical care available, the outcome may not be survival, but Nancy was acutely aware that most women did not even get the fighting chance that her sister had. Armed with encouragement from the new man in her life, Norman Brinker, a shoebox full or names and phone numbers, and a donated typewriter, Nancy moved it all into her guest bedroom and thus began the Susan G. Komen Foundation. She had the likes of Kay Bailey Hutchinson, Laura Bush, Jill Ireland addressing and stuffing envelopes in preparation for the organization’s charity balls.

The book is packed with data about breast cancer, the history of breast cancer, and the evolution of diagnosis and treatment, attitudes in the medical community as well as the general public, but it is presented in an intriguing manner, not pedantic at all. It covers not only the growth of the organization, but attends to the lesser-known breast cancer patients – men and young women. Often their breast cancer is the least survivable because as men and young women in their 20s, they are shunted off by providers as improbable breast cancer patients. So when they are finally diagnosed, the cancer has reached stage III or IV. Richard Roundtree (Shaft – one of the best movie musical themes ever) is a spokesman for the SGK foundation, reaching out to males and to African Americans specifically. Like Judy Holliday, Roundtree battled his breast cancer in secret.  Promise Me is organized rather peculiarly. Right in the middle of Susan’s story, a chapter completely unrelated would pop up, then back to Susan’s story. But, I overlooked that as well as a few chapters about Brinker’s post SGK accomplishments that do not seem to me to be relevant to the topic of this book, but given what Nancy Brinker has done for the world, I am willing to grant her a little self-indulgence. Bottom line, it is a very good read, well worth a few hours of anyone’s reading time.