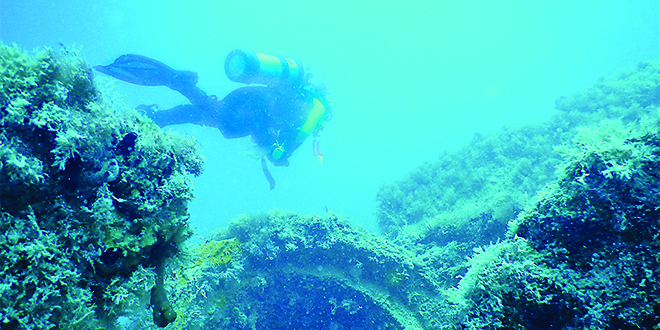 Recent residents to Marco Island, Chris Haunschild and his wife Jennifer, read an article about the Artificial Reef Project and wanted to provide a lasting gift for the people of Marco Island and Southwest Florida. “We moved our family here for the unique beauty and traditional values,” stated Chris Haunschild, “and wanted to provide a place for marine life to flourish and a place for people to fish for generations.”

The reefs will now be augmented with artificial reef modules; specially designed habitats for marine life made of concrete and limestone. The modules serve as a vital component of the overall project and will be placed in proximity to the reefs.

With their donation, Chris and Jennifer Haunschild have the satisfaction of knowing their family’s contribution will forever stand as a valuable legacy to our community. Haunschild Reef will be placed on nautical charts worldwide…in perpetuity.

A documentary film about the project, Paradise Reef, received an Emmy Award from the National Academy of Television Arts & Sciences’ Suncoast Chapter. The one-hour documentary film follows the quest to secure donations and grants, rally community support, and deploy 18,000 tons of reef material to form 36 reefs; all without the use of taxpayer funds. The documentary film may be viewed online anytime at video.wgcu.org/video/2365794811.

“I have been excited about this project from the start,” states Eileen Connolly-Keesler, CEO Community Foundation. “We are pleased to provide the financial stewardship services and be a part of a project that impacts our local environment and economy.”

It was four years ago that the Economic Recovery Task Force (ERTF) Chair, Diane Flagg joined with Peter Flood, a local attorney with a big idea, developed a business plan and worked with a team of professionals and local government agencies to apply for and secure 1.3 million dollars in private BP grant funds and over $600,000. in private donations. The project is anticipated to generate an estimated $30 million dollars annually.

To make a tax-deductible donation to the Artificial Reef project contact the Community Foundation of Collier County directly at 239-649-5000 or visit their website at www.cfcollier.org.