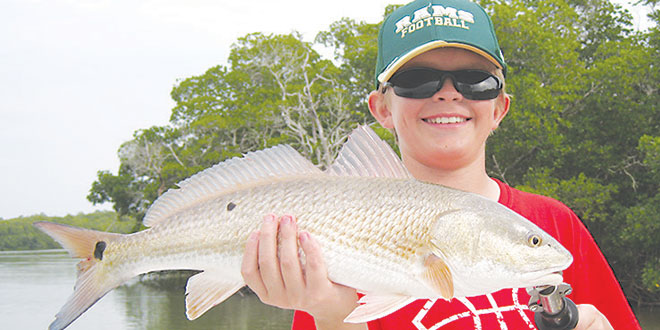 Here in the 10,000 Islands we target many different species of fish throughout the year. As the seasons change, so do our target species and methods of how and where we fish for them. Our top shallow water targets include Snook, Redfish, Speckled Trout, and Tarpon. In addition to these four, we catch Snapper, Sheepshead, Shark, Tripletail, Pompano, Permit, Cobia, Gag and Red Grouper, Spanish Mackerel, King Mackerel, Flounder, Catfish, Jack Crevalle, Ladyfish, and a few others. Below is a very brief explanation of our top four targets.

Snook: There is great prestige in catching this very elusive, highly sought-after sport and table fish. We target them all year long. Currently, you can only target them as “Catch and Release”, however when the season is open, you can keep one that is between the length of 28” to 33”. That is a 5” slot for the table, which really limits the amount taken from our pristine fishery, and has helped repopulate these fantastic fish. In the months of April through November, I like to fish for Snook in and around the mangrove islands along the edge of

the Gulf. At this time of year, the water is warm, the Snook move out of the backcountry, and will migrate to the outside islands. In the months of December through March, I fish for Snook in the backwaters as they move deep into the back bays and creeks where the water is warmer. A great way to fish for Snook is by casting a live pilchard, artificial bait jig, or top water plug. Snook are famous for their lighting runs, wild jumps, and the way they attack a top water plug. These fish are amazing on light spin tackle.

Speckled trout are one of the premiere game fish of our shallow water grass flats. Not only are they great table fare, but they are terrific topwater fighters! When hooked on light spinning tackle, it will give you quite a show as it dances and thrashes wildly on the surface as it attempts to regain its freedom. Speckled trout are known by many different names such as spotted sea trout, trout, or just specks. They are silver in color with olive-green tints on their back, and numerous small black dots 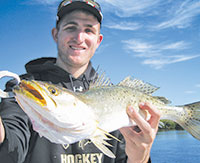 which extend over the dorsal fin and into the tail. Season is open all year. The lower jaw is larger than the upper jaw which has two prominent canine teeth. In general, specks have an elongated body with a large mouth. The diet of speckled trout consists of small crustaceans, shrimp and small fish, such as pilchards and pinfish. The average size is 14-18” with a weight of 1-3 lbs. Our estuaries are among the best throughout the entire gulf for these tasty guys.

Redfish are a super challenging opponent on the grass beds and flats using light spin tackle. The shallower the water, the more thrilling the fight. The bulk of small marine life and food will be found in shallow water around structures and near grassy cover. This offers the small fish, crustaceans, and mollusks protection from predators. Therefore, Redfish will be found near this abundant food supply. Redfish are easily identifiable by the body spot near their tail. They typically have one spot on each side, but I have seen as many as twelve spots on these pretty fish.

Tarpon: These acrobatic sport fish come in all different 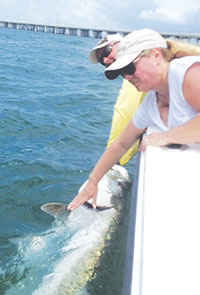 sizes in our area. During the month of April they start to move into the outside island bays, where they will lay up high on the water to absorb the warmth of the sunlight, making it great for sight fishing. Later on, in the months of May through August, Tarpon will gather in schools off of the outside beaches. The fight of a mighty Tarpon is a true battle, and an experience of a lifetime. Tarpon are strictly sport fish, and the satisfaction of a fully revived healthy fish is almost better than the battle itself.

Captain Rapps’ Charters & Guides offers family friendly expert guided, light tackle, near shore, and backwater fishing trips in the 10,000 Islands of the Everglades National Park, and Tarpon-only charters in the Florida Keys. Capt. Rapps’ top notch fleet accommodates men, women, & children of all ages, experienced or not. Between their vast knowledge & experience of the area, and easy going demeanors, you are guaranteed to have a great day. Book your charter 24/7 using the online booking calendar, and see Capt. Rapps’ first class web site for Booking info, Videos, Recipes, Seasonings, and more at www.CaptainRapps.com