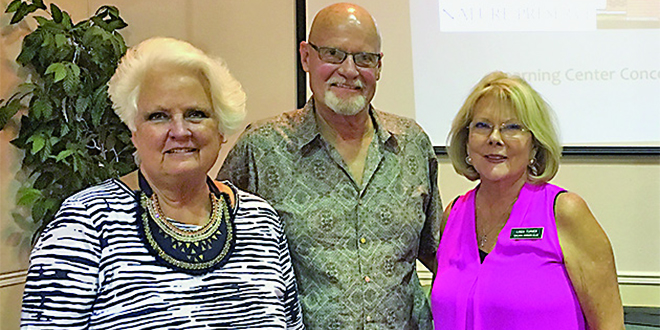 At the final meeting of the program year, Calusa Garden Club members enjoyed an educational presentation by Carl H. Way, Marco Island resident and chairman of Marco Island Nature Preserve and Bird Sanctuary and Marco Eagle Sanctuary Foundation, Inc. Way presented a slide show with information and potential plans for the Nature Preserve, and also outlined how the Marco Eagle Sanctuary Foundation, Inc. spear-headed the drive to acquire and preserve the property on Tigertail Court on which a pair of bald eagles has nested.

Way was alerted to the possibility of the Marco Island vacant land being sold, and be-came involved in the efforts to preserve the property for eagle nesting. He had earlier in his life become interested in preservation of bald eagles when he lived in northern Vir-ginia in the 1960s and learned that the bald eagles in the Chesapeake Bay area were dying because of the wide use of DDT and other pesticides. Pesticides made the ea-gles’ eggshells so thin that they were crushed, and also poisoned the fish and small animals that were the eagles’ diet.

The Marco Island nesting site is perfect for eagles because of its location near the wa-ter and because it has several tall trees but is not surrounded by forest. Mature bald eagles are three feet tall with a wingspan of six or seven feet. Since the eagles’ wing-span is so wide, they do not nest in forests, and they prefer to build their nests within a half mile of water. They need sturdy trees that are not too close to other trees or to pow-er lines to hold their nests, which can weigh up to one ton.

The number of bald eagle nesting pairs declined steadily from pre-colonial times when an estimated 50,000 pairs existed in what we call the continental United States to a low of 400 nesting pairs in the 1960’s. Today it is estimated that there are about 4,500 nest-ing pairs, because concerned citizen groups and state and federal governments took action to protect endangered species including bald eagles.

The Marco Island Nature Preserve and Bird Sanctuary comprises 11.7 acres and was formerly owned by Collier County School District. When the school district changed its plans for building on the site, Way and others formed the Marco Eagle Sanctuary Foundation, Inc. with the goal of preserving this 11.7 acres as a nesting site for the bald eagles that had nested on the site for several years. The birds mate for life and use the same nest year after year. But because nature has a way of making unfore-seen changes in habitat, with natural disasters demolishing existing trees and vegeta-tion, and because trees over the years mature and die, it is not enough to leave the Marco Island site alone in order to preserve the site as an eagle nesting place. Careful planning, and careful planting, is the only way to preserve the site.

Marco Island Nature Preserve and Bird Sanctuary has determined that its goal is to make the Nature Preserve a true piece of preserved natural land, with plants and ani-mals living there as they existed before Marco Island was developed. Working with community partners including Florida Gulf Coast University, Rookery Bay National Es-tuarine Research Reserve, Naples Botanical Gardens and Everglades National Park, the Nature Preserve organization is stablishing a succession plan for trees and plants, removing non-native plants, and planting trees that will grow to replace the tall pines the bald eagles currently use for their nest. The Nature Preserve has already planted about 20 new trees, including slash pine trees, buttonwood trees and live oaks.

To learn more about Eagle Cam and to see pictures of Marco Island’s bald eagle and eaglets, turn to page B-1 in this issue.