Presentation and Blessing of the Fleet 2013 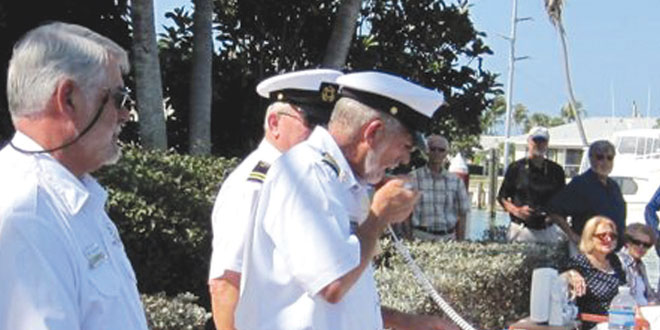 Eleven years after the first event, the Marco Island Yacht Club Fleet is still sailing on to an ever growing event. One hundred and sixty sailors and observers descended on the Marco Island Yacht Club, Saturday February 23, 2013. This annual event is greatly anticipated by the community and the entire Yacht Club membership as the fleet presents itself to the New Year’s Commodore and Bridge Officers. On shore the Rear Commodore Dick Irwin, Chaplain Neil Hunt and Commodore Jim Marr, saluted and blessed the Yachts as they passed in review.

From the beginning of boating, mariners have brought their boats before a pastor, priest or minister in a ceremony of blessing, so they would have a good season of favorable seas, profitable voyage and a safe return to port.

The Marco Island Strummers played the National Anthem, the canon roared and a Nautical Music welcome to each vessel was sounded as well as special requests for each presentation. After all vessels were blessed, the MIYC Chef Bob Alywin announced it was time to eat. A buffet of bounty nourished all, fellowship with members, family and guests was exemplary. Thanks to all who participated and observed.