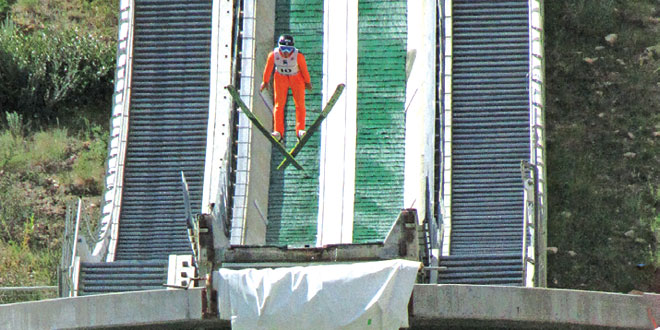 No matter who takes home medals in women’s ski jumping at Olympics XXII in Sochi, Russia, for a group of American woman, it will be a victory.

Since the first winter Olympics in 1924, men’s ski jumping has been included but women’s has not; it has been the only Olympic event that did not allow women even though women have been involved in ski jumping since the 1890s.

The addition of women’s ski jumping to the Olympic roster represents the culmination of a long, hard fight for a determined group of women from Park City, Utah. The first petition for inclusion was made to the International Olympic Committee (IOC) in1998 for the Nagano games; it was rejected. In 2006, a proposal for the Vancouver Olympics was also rejected by the IOC, but the International Ski Federation (FIS) did agree to allow women jumpers to compete at the 2009 Nordic World Ski Championships.

Fifteen female ski jumpers from the United States, Canada, Norway, Germany, Austria, and Slovenia banded together in 2009 to bring suit against the Vancouver Organizing Committee based on the argument that excluding women violated the Canadian Charter of Rights and Freedoms. Although the judge ruled that their exclusion was discrimination, the decision went against the women because the IOC is not a Canadian body and therefore not bound by the Charter. In April, 2011, however, the IOC agreed to include women’s ski jumping for the 2014 Olympics.

Fittingly, Lindsey Van of Park City who spearheaded the fight for inclusion won that first World Championship in 2009; Sarah Hendrikson of Park City won it in 2013. Ironically, when Van, who has now been jumping for more than 20 years, was rejected for the Vancouver Olympics, she held the world record for anyone, male or female, on the normal hill that would be used for those games.

Last month, I attended the US National Championships (long hill) at the Utah Olympic Park (UOP) in Park City. Wait! Last month was August. Ski jumping in August? It drops to the 50s overnight in Park City, but that’s not cold enough for snow!

During the winter, the US team spends a lot of time competing in Europe, so the Nationals typically are held in summer. Ski jumping involves skiing down an “inrun” ramp on long, wide skis to a take off ramp and jumping, trying to land as far as possible down the bottom “slope” or outrun; skiers are 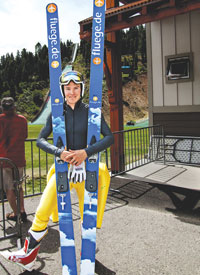 scored on distance and style. In the summer, the take off ramp is often made of porcelain and the outrun of a plastic material similar to artificial turf which is kept wet. Skiers claim they use the same technique in summer as in winter. The jumps tend to be longer in the winter, though, as the summer updrafts can impede performance.

This was the sixth consecutive year that the Championships were held at UOP. The site of Nordic ski jumping, bobsled, skeleton, and luge events during the 2002 Salt Lake City Olympics, it boasts the fastest sliding track and highest elevated jumps in the world and is still used as a training venue for athletes. In addition to watching young Olympic hopefuls train year round, visitors can takes rides on the bobsled and skeleton and during the summer, additional activities such as zip line and freestyle aerial shows are available. There is also a museum featuring the history of skiing and highlights of the 2002 Olympics; a recent addition is an exhibit devoted to women’s ski jumping.

Results of the women’s race at this year’s Nationals were Park City’s Lindsey Van and Jessica Jerome in third and second place, with Sarah Hendrikson finishing first. This was her second National title; she missed the competition last year due to knee surgery. Jerome is a ten time National champion.

Sarah is a favorite to place in the Sochi Olympics. If she does take gold (or silver for that matter), it will be the first time for any US athlete, male or female, from the US in ski jumping. The first and last bronze medal was won in 1924. Her closest competitor is Sara Takanashi from Japan. My hopes are with Sarah with an h as it would be fitting that someone who fought so hard to be included takes the gold.

In the Olympics, there are two ski jump events; normal hill and long or large hill. Normal hill is 295 feet long, and only individual medals will be awarded. Long hill is 393 feet long and there will be both individual and team medals. The IOC approved the inclusion of women’s ski jumping only on the normal hill. Let’s hope this changes in future games. 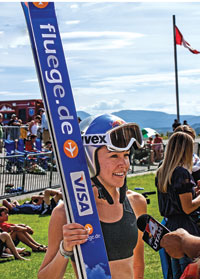 National and World Champion Sarah Hendrikson being interviewed after winning this year’s title at the Nationals.

Canadian ski teams were invited to participate in this event, but could not compete for the US title. A Canadian to watch at Sochi is Calgary’s Mackenzie Boyd-Clowes who set a new record at this competition.

Almost 4 years ago, I had the privilege of watching the American Nordic Olympic Ski Team train in Park City for the upcoming Olympics in Vancouver and wrote about it in one of my columns. One of the athletes highlighted was the very personable Billy Demong preparing for his fourth Olympics. Billy went on to be the first American in 86 years to win the gold in Nordic skiing. He won it for Nordic Combined which is a mixture of ski jumping and cross country. He also was selected by his Olympic teammates to hold the US flag in the closing ceremonies, a great honor coming from one’s peers.

Although Billy, who won the first Nationals in 2001, did not earn a place on the podium this year, all attention by press and spectators was on him, a testament to the respect he has earned as an athlete and genuinely good human being.

In December, Olympic trials will be held in Park City with the team of five men and four women to be announced in January. American women have won two of the three World Ski Jumping Championships held since they were allowed to compete. They will be a force with which to be reckoned. “Pioneers” has been a word used in referring to these women and they truly are. Rarely do we have an opportunity to see such determined individuals not only reach their goal but also actively participate and excel in it.

UPDATE: I wrote this column right after attending the Nationals. Subsequent to this event, Sarah Hendrikson jumped 148 meters on a long hill training in Oberstdorf, Germany. The men’s Olympic record on a large hill is 144 meters. Unfortunately, during training, she suffered ligament damage to her right knee. On her trip home from Germany to Park City, Sarah tweeted out to her followers “Everything happens for a reason. There is not one thing in this world that will stop me from the dreams that I have dreamt”. Sarah had surgery on her right knee Aug. 30; a full recovery is anticipated, although no timelines have been predicted. Here’s wishing Sarah a speedy recovery.