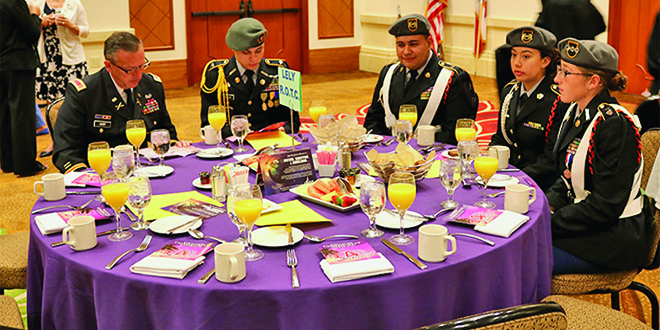 Photos by Steve Stefanides | Lely ROTC at the Prayer Breakfast.

Karen Blake, co-chair of the event welcomed a sell-out crowd to the Palms Ballroom at the newly branded JW Marriott property as they continued with a tradition over three decades old in the community.

Colors were posted by the ROTC post from Lely High School as Billy Dean and Dawn Birch had the assembly join them in “God Bless America.” After reciting the Pledge of Allegiance, Pastor Kirk Dreiser of the Wesley United Methodist Church gave the Invocation and Blessing to the group. After breakfast, Howard Reed, a newly elected city councilman, read a prayer for local Marco leadership.

Dawn Birch entertained the gathering with her extraordinary voice as she sang a number of appropriate songs, before Karen Blake introduced the guest speaker for the morning, Mr. Bob Williamson. He would detail his life’s journey from the depths of depression, alcoholism, drugs, crime and despair. He did this while sharing the specifics of his trials and tribulations and gave credit to a merciful nurse who aided him in his recovery after a horrific car crash when he was in his early 20s.

It was while recovering from those almost fatal injuries that he would find God and begin on his path of personal redemption and hope. Williamson would become successful in a number of business ventures, but would have to fight off another addiction, that of wealth and the temptations that would bring. He would also be able to fight that temptation and once again regain his firm footing and go onto being an extremely successful entrepreneur, selling his software business for $75 million in cash.

He is currently the CEO of the Williamson Group USA, a holding company with several subsidiaries, including his latest venture, the Honey Lake Resort and Spa. It is being built on his 4,700-acre plantation near Tallahassee, Florida.

He is also a successful author, having written “Miracle on Luckie Street,” which chronicles his life and his journey to success.

Needless to say, the audience sat in silence as Williamson detailed his slide into oblivion and his subsequent journey from the darkness into the light of success.

The Benediction was given by Cathy Gallus, of the New Life Community Church. The assembly would listen to Dawn Birch sing one final rendition of the inspirational song, “You Raise Me Up,” as the proceedings adjourned.