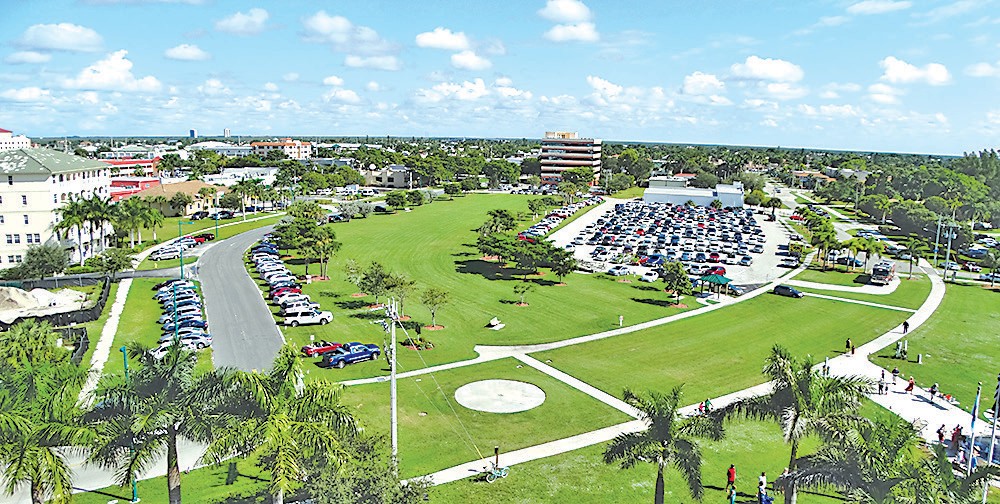 Lee Rubenstein, the commander of the local American Legion Post, came forward with a proposal for some upgrades to the area abutting the Veterans Memorial area, to enhance the appearance and the safety of the memorial area.

His first presentation dealt with the group’s desire to plant some pitch apple trees at the rear of the memorial, which will act as a buffer to soften the rear of the area and provide some additional buffering for the neighbors across the canal. The fundraising arm of the veterans group would assume the costs for that vegetation and installation. Affordable Landscaping will also be a contributor to the project.

Greg Schneider from Condee Electric gave a presentation on the proposal for enhanced lighting of the area for safety purposes. Rubenstein explained that he had been working with city staff in an effort address the need for the lighting.

Unlike the vegetation, they would be seeking the city’s commitment for financial assistance in the project, which would amount to $25,000. “This is a safety issue more than anything else. We have folks that wish to access the memorial but are unsure of the walking areas,” said Rubenstein.

The board agreed that the use of some of the monies allocated towards development of the park might be a good application for funding of this project, and would make that recommendation.

Marco Island City Council has sought suggestions as to how to move forward on the design of the park and the amenities that the community would like to see. As part of that direction the committee on June 20th moved to request that $70,000 be allocated out of the 2017 budget to proceed to update the Veterans Community Park Master Plan. This project would take into considerations the changes that might be envisioned by the community in 2017.

Amongst the “hot-button” issues were the need to address parking along the perimeter of park, the construction of appropriate sanitary and washroom facilities, and the idea of some type of stage or performance structure for concerts, plays or events.

That recommendation to council will be made at a future city council meeting. The monies are available from the allocation of $250,000 in last year’s budget.

The Parks and Recreation Advisory Committee will meet again at 3 PM on July 18th in council chambers.