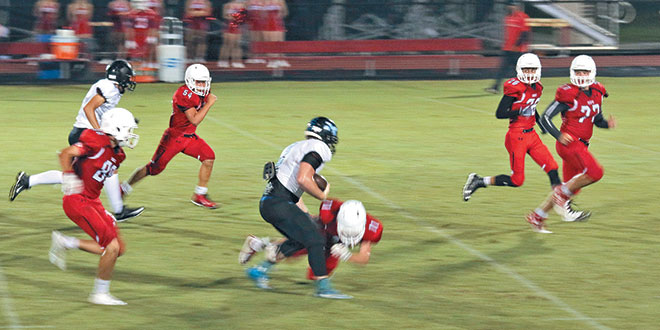 MIA’S Tyler Gresham shakes off the defender in gaining yards in the spring game.

The spring game for Marco Island Academy (MIA) didn’t come out well in the won-loss column, but coach Damon Coiro saw a lot of positives.

The Scots scored on two huge pass plays in the first half. In the second half, when Coiro frequently subbed his charges, two running plays by the Scots in the third and a blocked punt in the fourth resulted in scores.

“We had scoring opportunities in the first half, but we turned the ball over,” Coiro said. “We got to play everyone and the team showed signs of doing some really good things.”

Coiro asked his team to play hard and at full speed no matter what the score.

“Sometimes it won’t be enough, but you still want to 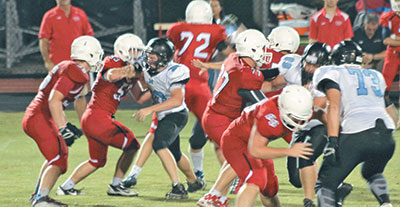 give it your all and they did. I thought Tyler Gresham (quarterback) and Bon Deese (fullback) were the best two on the field from both teams,” Coiro said.

Vinnie Moller added to the running game. Logan Gross handled kick offs and punts, while being a stalwart on defense. Kyle Ginther, at tackle and defensive end, played well.

“We expect good things out of Logan and Tyler,” Coiro said.

“We are a work in progress. We want to build a culture of being resilient. We want to focus on not making excuses, having the team grow into resilient fighters.”

On Sunday night the school held a fundraiser to support all its sports programs.

“Parents came up to me, telling me about their kids enjoying football. They are thrilled that the kids are having that much fun,” Coiro said.

“There will come a time when we are measured by wins.”