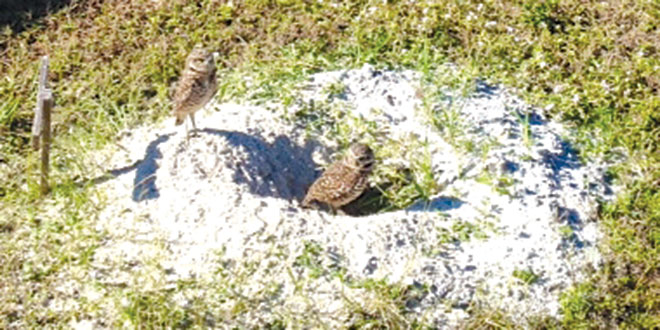 To balance out the alarming and sad stories of wildlife that have occurred recently in and around Marco Island — the pilot whale tragedy along the southwest coast of Florida, ultimately ending just south of Marco Island on Kice Island with 25 dead whales; the news of the Marco Eagle Sanctuary bald eagle pair nesting interrupted; and the shooting of a wild boar on Marco Island’s beach — a few positive wildlife interactions with people on Marco Island have occurred and need to be noted. It is safe to say that one of the major reasons we all live here is to enjoy the environment and the wildlife that inhabit our unique island. We all love to live and recreate here, but a conscious effort to be more in tune with the native wildlife and how to live with it, not create conflict, is a cultural shift that needs to happen if Southwest Florida is going to sustain with all the near-future development.

Here is the story of Jack and Barbara Markel and their burrowing owls. Over the holidays, new construction of a home and seawall was permitted. The property was inhabited by a pair of burrowing owls for the past couple years, and had produced three chicks just last nesting season. The Florida Fish and Wildlife Conservation Commission issued a burrow removal permit for this property so the development could begin. This permit — as allowed by Florida Statutes to remove the burrow basically allows for the digging up of the burrow and the subsequent displacement of the two remaining adult burrowing owls — was issued outside of the owls’ nesting season when there are no eggs or chicks present.

The day of the burrow removal is always a tough one. It is not technical; just a shovel in hand to dig and collapse the burrow. If the owls are present, a biologist ensures they are not in the burrow tunnel or nest cavity when the destruction begins. The owls will watch and do behave alarmed when the burrows are removed. In this case, the pair of adult owls flew across the street to a house and perched on its eaves near the front door. Once the burrows were removed, material, equipment and vehicles arrived to begin seawall construction. It is very typical for the displaced owls to “pop up” on a nearby property with a new burrow. Sometimes the new burrow will be found on the same street or one or two streets away from their original burrow site, so the area is monitored for a new burrow.

Over the next couple 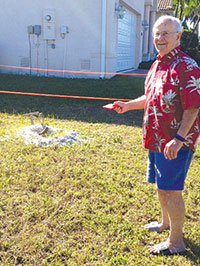 weeks, no new burrows were noted in this neighborhood. Many of the neighbors were on the lookout. The Markels, at the home across the street from the original burrow, were watching the two burrowing owls daily, as they perched on the eave by their front door. The Markels were concerned that they owls needed a burrow. Owning the undeveloped property next to their home, they had their grandsons, who were visiting over the holidays, create “starter burrows” to entice the owl pair to dig a burrow and hopefully nest on their property — a great place for their new burrow.

The Markels’ grandson, 11-year-old Colin Feldt from Texas, enthusiastically followed the easy steps to create a “starter burrow.” He picked an open, treeless area of the property away from shrubs, drainage area and street. Using a small shovel, Colin started a burrow entrance by simply digging 8-12 inches at a 45 degree angle. He mounded fresh, white sand at the entrance and placed a T-perch at the side of the entrance. The disturbed sand and perch nearby quickly received the owl pair’s attention, and within a few weeks, the owls took ownership of the “starter burrow” and started digging it further themselves.

To date, the owl pair is now using this completed burrow permanently and will most likely produce chicks in the next month or so, as it is nesting season. The Markels and others in the neighborhood are enjoying their new next door neighbors; the new owl burrow is literally only 50 feet from the original burrow that had to be removed for the new house construction. Jack Markel stated, “I hope they stay for a very long time.”

The success of the Markels’ “starter burrow” is a hopeful indication that the Marco Island burrowing owl population can sustain the development of our small island. This displacement situation that does not negatively affect the owl population now can happen as long as there are undeveloped properties and open spaces in yards and parks on Marco Island. As development increases and build-out of all the open, undeveloped sites completes, the owl population will lose nesting habitat and ultimately decline.

We all can help. If you have an open area in your yard, please consider a “starter burrow” and help sustain the Marco Island burrowing owl population. If interested in creating a burrowing owl “starter burrow” on your property, please contact Nancy Richie, environmental specialist for the city of Marco Island at 239-389-5003 or nrichie@cityofmarcoisland.com. An informational brochure and free T-perch are available.