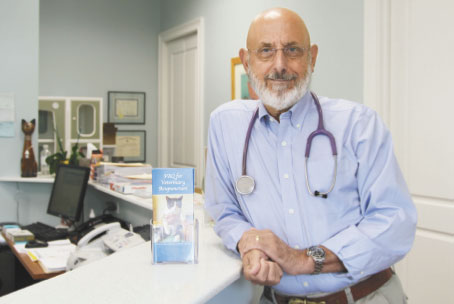 Island Animal Hospital has been busy making some major changes. With a brand new facility and the introduction of new alternative therapies for pets, current patients as well as newcomers will certainly be pleased with their experience.

After a twenty-year veterinary career in the northeast, Dr. James Bowen and his wife Donna moved to Marco Island and established a new practice, opening Island Animal Hospital. For the past ten years they, along with vet technicians Daphne Polson and Lindsey Ladwig, have been treating the precious pets of Marco Island. Their sincere care and concern for the animals they treat has garnered a stellar reputation among the community. Dozens of thank you cards displayed in the office are a testament to their commitment.

Due to such a positive reputation, Island Animal Hospital has seen a steady growth within the practice, creating a need for a larger facility. About eight months ago, Dr. Bowen and staff moved to a new location at 860 Bald Eagle Drive. “We have more rooms here, with three exam rooms rather than two. We were able to design the whole interior and truly make it a state-of-the-art facility,” said Dr. Bowen. The extra space has also made it possible to bring pets in and out of the office with ease. The new office also boasts a brand new surgical wing and recovery area for their patients.

The larger space has made room for the introduction of all natural grain-free Fromm and Evo dog and cat foods as well.

The greatest change, however, has been the addition of a second veterinarian to the staff. Dr. Joseph Parisi, who specializes in alternative medicines, has become a part-time employee at the new facility. Dr. Parisi is also a native of the northeast and had his own practice there for nearly 30 years. For the first 18 years of his career he practiced only traditional veterinarian medicine. “I had animals where traditional medicine didn’t help anymore or the side effect of the traditional medicine was worse than the disease itself. I figured there had to be something better out there.” He decided to take a course in veterinary acupuncture at Tufts University and began to use the ancient technique to treat some of these special cases. He then took his alternative therapy approach further, becoming certified in traditional Chinese herbal medicine for animals.

The introduction of alternative therapies into a traditional veterinary practice is somewhat of a paradox. This is what makes Island Animal Hospital such a unique facility. “We are trying to get the traditionalists and the alternative people to shake hands and be friends,” Dr. Parisi said. “You wouldn’t think that these two styles would be able to coexist, but in actuality, people who wouldn’t seek traditional medicine can now come in and seek Dr. Parisi’s care,” added Dr. Bowen. Continued Dr. Parisi, “it gives people a choice. We can serve the community better if we can give them more options.”

Dr. Parisi is currently practicing his alternative therapies at Island Animal Hospital on Tuesdays but plans to eventually expand to two to three days a week. He will also change hats and practice traditional veterinary medicine if Dr. Bowen is ever out of the office.

The addition of alternative therapies into a brand new facility has truly made Island Animal Hospital a top notch facility. “We strive to offer the very best in medicine and diagnostics to our clients both at our facility as well as on a referral basis,” explained Dr. Bowen. Those who have brought their pets to Island Animal Hospital would most certainly agree.

To learn more about the alternative therapies offered, contact Island Animal Hospital at 239-394-8080.