Policeman of the Year: Granneman 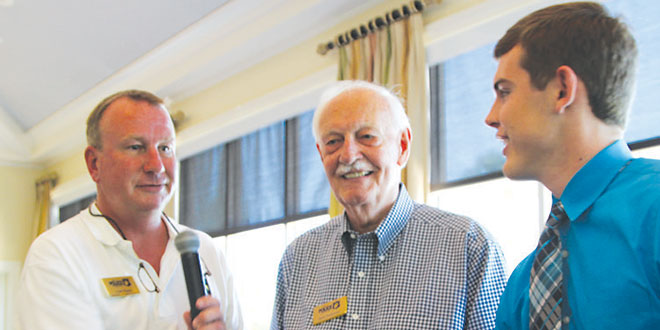 There was a full agenda at the recent Lunch with the Chief sponsored by the Marco Island Police Foundation. First order of business was a scholarship presentation by Foundation member, Jack Patterson, to high school senior, Colin Brown. Colin’s father is auxiliary policeman, Alan Brown. Colin will be attending Nichols College, majoring in Business.

Chief Al Schettino thanked the audience for the support showed to the department. He then began to tell the audience about the officer selected as the ‘Officer of 2014’.

Schettino stated, “On one of the officer’s very first calls, he responded to a fatal vehicle crash, and his second call was a serious injury crash. The officer came to the attention of command staff when it was noted that he averaged twice the number of traffic stops and warnings compared to his colleagues. He was commended in 2014 for volunteering to give up his weekends to cover an unfilled patrol shift. Command staff again took note of his work ethic and pro-active patrol style in July of 2014, when 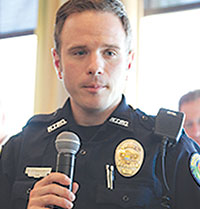 Policeman of the Year, Brian Granneman.

he had six arrests in less than a month. (Three DUI’s, two suspended driver’s licenses and a domestic violence arrest.) He was again noted by command staff at the end of 2014, when he modified his patrol schedule to benefit the department and community, although it was at the expense of sleep and days off for him. Finally, this officer volunteered to teach the DUI and the BUI (boating under the influence) portion of the Citizen’s Academy, held in December 2014. When a statistical analysis of the officer was completed, he was found to personally be responsible for 50% of all the department’s DUI arrests. He accounted for 10.9% of all traffic enforcement activity in the department. His data work on the computer while on patrol was nearly twice that of other officers, and he wrote 18% of all traffic citations for the entire police department. He is known as a ‘can do’ or ‘I will do’ officer who does his job quietly and professionally.” Schettino said, “I take great pride in co-nominating Officer Brian 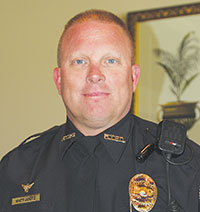 Granneman as the 2014 Marco Island Police Foundation’s Officer of the Year.”

Granneman humbly accepted the award saying, “Thank you very much, it means a lot to have the support of the police department and to be recognized by my peers, especially because of the experience level in this department. I really appreciate that.”

Chief Schettino then described the process of appointing a new sergeant. Candidates had to answer two questions: what’s the difference between a manager and a leader, and why they’d want to be a sergeant. Eight candidates were then interviewed by a three member board consisting of Chief Schettino, a Lieutenant from the Naples Police Department and a member of the FWC. They were questioned about policies and procedures. “After 19 years of law enforcement, the sergeant has the ability to assess people and effectively supervise. We’d like to announce Matthew Goetz as the newest sergeant of the Marco Island Police Department.” Chief Schettino had the honor of pinning Matt. 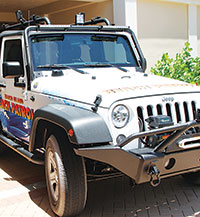 during the last 18 months. Positive changes at the top have had impactful results for the department. Turnover has been stabilized; the department is now fully staffed. Hernstadt is pleased to report crime rates are down 32%, making Marco Island one of the safest cities in Florida. The Police Department has been restructured for overall efficiency. The MIPD conducted mutual training, and has an improved working relationship with the Marco Island Fire Rescue Department. Among the accomplishments was the implementation of a Community Service Officers (CSO) program which resulted in the hiring of eight part-time CSOs for code compliance, beach patrols, traffic control assistance and school patrols. Among the changes was a brand new Beach Patrol jeep, brightly colored and easily identifiable, it will be seen frequently along the beach. Also new are signs which echo the no-glass, no-bottles ordinance already in place. The signs will serve to inform beachgoers of the new ‘zero tolerance’ commitment of the department to protect our beaches. The signs clearly state ‘Subject to arrest, maximum fine of $500 and 60 days in jail’.