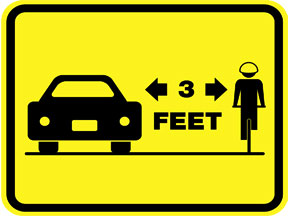 The Marco Island Police Department recently completed a study of accident trends from 2008 to 2011 and found incidents involving cars and bicycles, or pedestrians, has increased 50%. “We need to share the limited amount of space we have and do it properly so we don’t injure each other…when we see this increasing trend [of accidents] we need to ask ourselves, why?” Assistant Chief Dave Baer said that the department is teaming up with the city Bike Paths Committee and the Knights of Columbus to improve bike safety awareness on the island.

Ben Farnsworth is the current Grand Knight for the club. He’s an avid biker whose own run-in with a van sent him through the vehicle’s window last year and left him with a hard-earned awareness of the issue. “I would never have guessed that I could have been involved in an accident like this, but it was brought home painfully and vividly for me.” Farnsworth was riding on the sidewalk at the time, where more injuries occur than in the street bike lane, according to Baer. Farnsworth was wearing a helmet at the time, which saved him from serious injuries. Nonetheless, the sight of him post-accident, “put helmets on about 20 guys who weren’t wearing them before.” It’s for this reason that Farnsworth has put fundraising and public awareness activities for bike safety on his agenda for his term as Grand Knight.

Baer adds that in accidents like these, failure to yield properly is the number one cause, and in a case of human versus car, both parties are often at fault but it’s the car that’s always going to win. “We are happy to come and speak to your community group on safety issues…voluntary compliance is better for everybody.”

Voluntary compliance is also your welcome back catchphrase if you’re returning for season and hitting the streets. Traffic stops and speed enforcement remain a priority for the department. “It’s not random,” says Baer. “We look at crash data and complaints and create our enforcement objectives from there.” He adds that there are a multitude of reasons why traffic enforcement is valuable. “It often leads to discovery of other crimes or evidence. Look how many folks we stop who don’t have a driver’s license. It makes the community safer.”