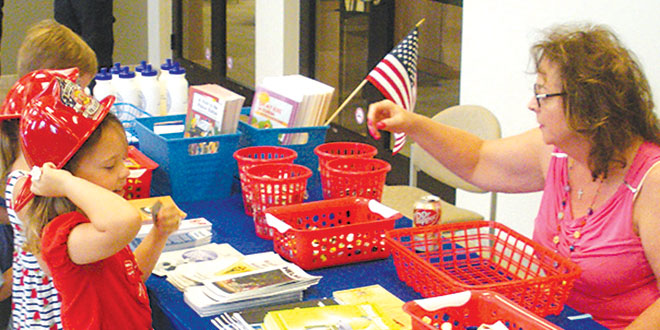 Children’s laughter and the smiles of adults were in generous supply as they toured the facilities of Marco Island’s police and fire-rescue departments.

They were there for the departments’ June 20, joint open house, which gave the community the opportunity to chat with the island’s emergency responders and gets a bird’s eye view of the equipment they use on the job.

Held at police headquarters and fire-rescue department Station 50, located behind city hall, the open house was indeed kid friendly, with vehicle displays – including fire-engine tours, fire safety games and prizes. There were also free emergency vehicles toys and fire helmets, crayons and coloring books, and candy and cake. Children also got to shoot a low-pressured 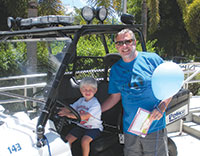 Dave Rice and his son Connor, 3, enjoy one of the Marco police department’s beach patrol vehicle.

fire hose at a target, an attraction that proved popular throughout the event, which ran 11 a.m. to 2 p.m.

“We had a good turnout; a lot of children, a lot of big smiles,” said Chris Bowden, the fire-rescue department’s public education coordinator. “There were a lot of kids wearing the little firemen’s helmets. They got to spray the fire hose. They got to see what the police officers do. They got to meet firemen. Like I said, there’ve been a lot of smiles.”

Carol and Matt Dean were there with their children; Grace, 9, Sam, 8, Thomas, 7, Charlie, 5, and Annie, 3. The Deans moved to Marco recently from Myrtle Beach, S.C.

“We wanted to see the police department, 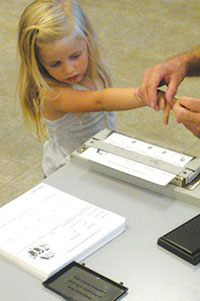 Annie Dean, 3, takes a turn at getting finger printed.

since we just moved down here about two weeks ago,” said Carol Dean as the family toured the police department. “Also, my sons are very interested in becoming police officers and little Charlie wants to be a firefighter. It’s gone great. Everyone is very friendly and hospitable. The kids loved trying on all the uniforms and the helmets. They loved spraying the fire hose. It was wonderful.”

Chaz Elliott said his children enjoyed touring the fire engines, meeting the fireman and seeing the safety equipment and of course, the cake.

Bowden and Marco Police Chief Al Schettino said it had been several years since their departments held an open house, but plans call for them to 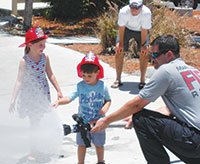 Grace Elliott, 5, and her brother Mason, 2, get a kick out of handling the fire hose

“We got together with the police department and said, let’s have an open house,” said Bowden. “Let’s bring people from the community into the stations to see what we do and see what kind of equipment we have.”

Open houses can play a vital role for emergency responders and the public, said Bowden and Schettino.

“It gives them a first-hand look at what we do, where we’re at and what we provide for the public, said Bowden. “People have a lot of questions and this is a great time to ask them. We try to provide as much information to the public as is possible and this is one of the ways we can do it.” 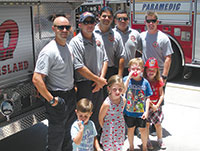 Members of Marco’s fire-rescue department and some of the youngsters who attended the open house. PHOTOS BY DON MANLEY

sort of friendly interaction can be a difference maker in police work.

“It’s crucial that as many officers meet the community members, as is possible,” said Schettino. “We want them to develop relationships with the community because those relationships are valuable and at times of crisis, they’re able to resolve issues much more quickly. We want the public to know them in all aspects of life, everyday, on the bicycle, on the beach. We want them (officers) to interact with and spend time talking to people, to develop those relationships. Everything runs seamlessly when that happens. We’re all in this together. It’s all of us working together to keep the community safe.”

“… all of us working together to keep the community safe”