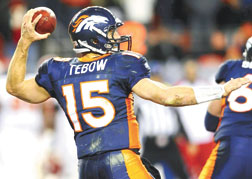 Wild Card week of the NFL playoffs followed the expected storylines; unless, of course, you count the Broncos victory over the Pittsburg Steelers in overtime. Besides that thriller, the other games went according to script. The Houston Texans, in the franchise’s first playoff appearance, beat the mostly rookie and inexperienced Cincinnati Bengals. Even with the Bengals being eliminated from the Wild Card round, I want to point out what rookie wide receiver and quarterback AJ Green and Andy Dalton have accomplished this season. The Bengals made the playoffs after losing arguably the best quarterback and wide receivers in franchise history in QB Carson Palmer, and WRs Chad Ochocinco and Terrell Owens. I am confident that this new group has many amazing years to come; we definitely haven’t heard the last of the Bengals.

The high powered, record setting New Orleans Saints closed the door on the up- and-comers from Motown. This was the first successful season that Detroit had enjoyed since ’99. Once again, the Lions were a young and inexperienced team; and, in the end, they couldn’t go the distance with the recent Super Bowl winners. Having a great quarterback in Mathew Stafford will surely give their fans hope for a lot of return visits to the post season.

In New York, the divisional winning Giants clobbered the Atlanta Falcons. Most people in the know predicted the outcome, so no great surprise there. In fact, the first three games felt almost routine.

It seems that the NFL was destined to save the best for last. Finally, the most exciting game of the weekend, the Denver Broncos hosted the Pittsburg Steelers. The Broncos found themselves to be underdogs to the Steelers. Even though Denver was division champ, the Steelers had won four more games than the Broncos in an arguably more difficult division. Three teams in the AFC North made the playoffs this year and two of them enjoyed 12-4 records. The Broncos’ quarterback, Tim Tebow, started only a handful of 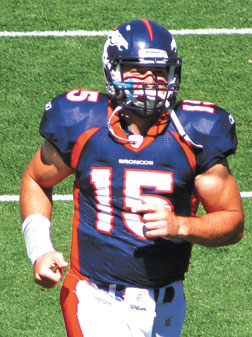 games last season. This year, he took over a 1-4 team and never looked back. It was the first time the Broncos made the playoffs since 2005. The victories came by small margins, however, and were usually achieved by last minute heroics. Defeating the AFC representatives in last year’s Super Bowl should go a long way in keeping the “nay-sayers” quiet. Tebow was probably the most talked about starting quarterback this season. Everyone who doubted his throwing mechanisms and his decision-making must be questioning their own judgment after this game. He racked up 316 yards, threw two passing touchdowns, and added a rushing touchdown in the Broncos overtime win against the Steelers. An eighty-yard touchdown strike to Demaryius Thomas on the first play in OT was all it took to cement Tim Tebow as a bona fide star in the NFL. This was one of the best debuts of a Denver quarterback in the post season in franchise history. Even the Bronco legend and current GM was quoted after the game exclaiming, “I love it! I love it!”

This weekend, these teams face many challenges as they go against an even better crop of teams in the league. The Giants have to go into Lambeau Field and face the Green Bay Packers; who have only lost one game this season and have been picked by many to win it all. The Saints must compete against one of the best defenses in the playoffs right now, the San Francisco 49ers. The Houston Texans meet Ray Lewis and the Baltimore Ravens. The Ravens are a favorite to take the AFC. Of course, the Denver Broncos have to try and recreate the magic against Tom Brady and the offensive juggernaut known as the New England Patriots. These two teams met a few weeks ago and it was Brady and Company who cast the spell in that outing. It will be hard for any of these road teams to have an upset this week, but if the NFL teaches us anything, it is to expect the unexpected.