‘Planes, Trains and Automobiles’ at Center for the Arts 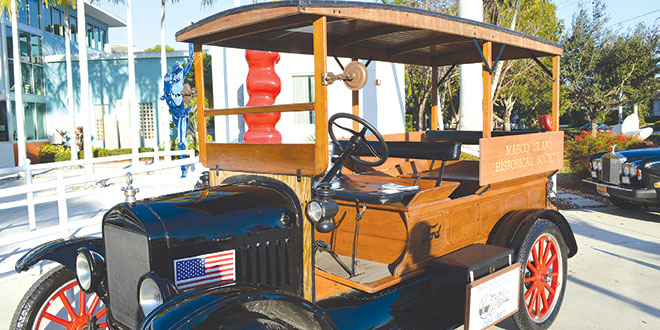 More than 100 people attended the opening reception for the Marco Island Center for the Arts’ latest monthly exhibition — “Planes, Trains and Automobiles.” The exhibit has something for everyone’s taste from large-scale pieces incorporating found objects to more traditional approaches to whimsical toys, and it features the work of six Florida artists: Paul Arsenault, Paul Hambleton, Chris Jenkins, Jo-Ann Lizio, Richard Moore and Brewster Moseley. Several of the participating artists were on hand to discuss their work at the opening reception.

The exhibit will run through Feb. 27.

Guests at the opening reception also were treated to a small-scale vintage and custom car show in the Center’s driveway. On display were the Marco Island Historical Society’s 1914 Model T, a 1936 Ford four-door sedan owned by 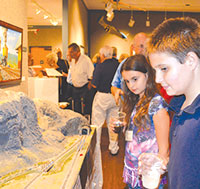 Exhibit organizer Inez Hudson credits her brother-in-law with the inspiration for this event. “He worked as an engineer for the Grand Trunk Western, was a true ‘railroad’ man and instilled in me a similar love of trains,” says Hudson, who is an oil painter and one of the center’s instructors. “I’ve been thinking about this exhibit for more than seven years, and am so glad to finally bring it to fruition.”

In addition to array of works by the featured artists, several others helped make the exhibit the come together. Marco 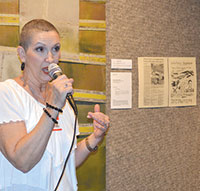 Exhibit organizer Inez Hudson welcomes guests to the opening reception of the ‘Planes, Trains and Automobiles’ exhibitionat the Center for the Arts.

Islander Malcolm Newbourne, who owned a trucking firm before retiring, loaned the center his personal collection of one-of-kind, original paintings, all dealing with transportation. Richard Taylor, owner of Rail Dreams in Naples, provided the center with a scale model of Palisade Canyon in Nevada, its tracks and functioning train that is a replica of the one currently being operated by the Union Pacific Railroad. Not to be outdone, the flying enthusiasts of the Collier Model Aeronautics Club also got involved. Clifford MacMorris, head field trainer, and several other flying enthusiasts have hung their own model airplanes off the gallery ceiling — just make sure to look up.

The Marco Island Center for the Arts is located at 1010 Winterberry Drive. For more information, call 239-394-4221 or visit www.marcoislandart.org.