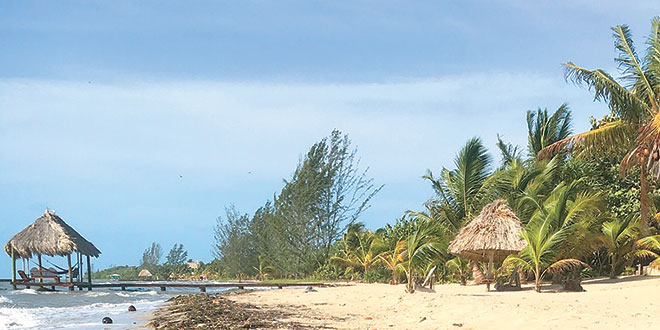 Placencia is known for its golden beach. Photos by Jessica Hernstadt

For low-maintenance travelers who appreciate unspoiled natural beauty, a trip to Placencia is a must.

Located in the Stann Creek district of Belize in Central America, Placencia is a 16-mile long, narrow strip of land. Although it is a peninsula, the Caribbean Sea on the east and lagoon on the west make Placencia feels like an island.

The area is known for its natural beauty: golden sand beaches, lush foliage and a variety of tropical birds and sea life. Visitors can relax on the beach, or partake in a variety of activities such as kayaking, sailing, snorkeling or diving. Divers will see marine life and amazing coral formations clearly because of the pristine water on Placencia’s coast.

There is one main road in Placencia, which was paved in 2010, and little traffic. Many visitors walk, bicycle 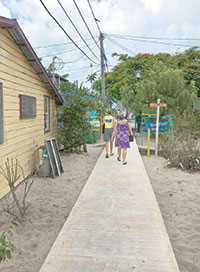 or drive golf carts to get around. Driving through the area travelers can catch a peek at many red dirt roads leading off the main road, reminiscent of the days before the road was built.  At that time all vehicles, shoes, and often clothing, were spotted orange from the rich colorful earth.

At the very southern tip of the peninsula is a charming village on the water. The village is the hub of activity for the peninsula, and is the place to be for shopping and nightlife.

Notably, Placencia holds the Guinness Book of World Records for having the narrowest street in the world, at only three feet wide. Despite its small size, the street is bustling, lined with hotels, restaurants and shops. The shops carry everything from the typical tourist t-shirts to unique local art, textiles and sculptures, 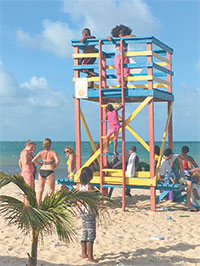 Children play on the beach at Lobsterfest, while music plays in the background.

wooden Mayan masks and stone calendars. Often you may find artists busy at work, painting, carving or making beaded jewelry under the shade of a tree along the sidewalk.

For lobster lovers the best time to visit is the end of June, when the annual Placencia Lobsterfest takes place. Local restaurants prepare fresh lobster in every imaginable way. Some of the crowd favorites this year were the lobster fajitas, Thai lobster spring rolls and grilled lobster served with garlic butter. The festival also brings out the local talent, and musicians, young and old, perform throughout the day and night. Vendors line up from all over the country selling art, food products and handcrafted goods.

If you come when it’s not Lobsterfest, don’t fear – there is plenty of good food to be had! In addition to many local restaurants 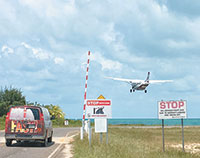 Traffic on the main road stops when planes take off from the Placencia Airport.

with authentic Belizean cuisine, there is the award-winning Maya Beach Hotel Bistro, which also has an extensive wine list. And surprisingly, some of the best gelato can be found in the village at Tutti Frutti, where fresh local ingredients such as mango and sour sop are highlighted.

Accommodations range from economy to luxury; Francis Ford Coppola’s Turtle Inn being an example of the latter. Many private residences are for rent, often with pools if you need a break from the sandy beach.

Often visitors use Placencia as a home base to explore other parts of the country. Sightseeing tours to the nearby Mayan ruins of Nim Li Punit and Lubaantun are popular, as is a trek to Cockscomb Basin Wildlife Sanctuary, site of the world’s first Jaguar reserve.

Paved only six years ago, Placencia’s main road used to look like this red dirt road.

Miami to Belize City. From there, the peninsula is a scenic three-hour drive through the mountains and countryside or a short 35-minute flight on a small plane.

A word of advice: if you are high maintenance, this is not the trip for you. You won’t find shopping malls or Starbucks here, but you just may find the adventure you crave.

• Belize is bordered to the north by Mexico, to the south and west by Guatemala, and to the east by the Caribbean Sea.

• Belize is the only country in Central America whose official language is English.

• The Belize dollar is set at the rate of $2 Belize to $1 USD and the U.S. dollar is accepted as currency.