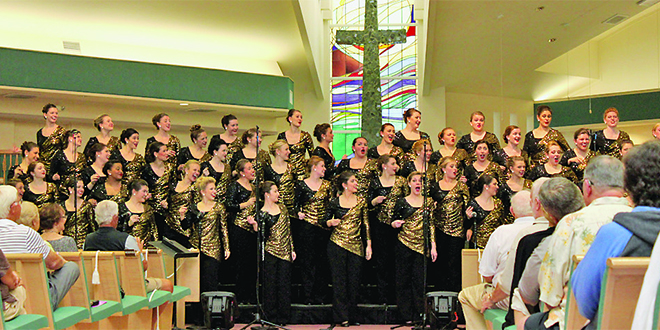 It was once stated that music is the greatest communication in the world. In honor of music and the Purduettes 75th milestone anniversary, 60 collegiate performers took the stage at United Church of Marco Island. Who are the Purduettes, you ask? The ensemble was founded in 1942, when the original Purduettes fulfilled previously booked appearances of the Purdue University’s Varsity Glee Club when the onset of World War II depleted the Glee Club roster. Since then the Purduettes captivate audiences from all over the world doing what they do best: sing. Other college students may be vacationing on spring break, but these ladies, and gentlemen of the band, are spreading happiness by performing.

Director Jeffery Vallier conducted the singers and brought out a powerful performance from the ensemble. The audience was taken on a vocal rollercoaster of masterful tones. This was no ordinary choir performance, the globally recognized group went through the audience in between performances, broke into solo groups and even introduced themselves and their majors. Assistant Director Sarah May accompanied on piano, never missing a beat.

What made the night particularly special, was an audience member in attendance. The Purduettes honored Jae Israel-Kellogg due to her 25 years of service and leadership of the Purduettes and for Purdue Musical Organizations (PMO). Jae served as director, assistant director, musical accompanist, arranger, and mentor for not only the Purduettes, but for many other musical ensembles. Her influence can still be felt in several musical selections in the Purduettes’ current repertoire, and her legacy lives on to enrich and benefit the lives of current PMO students.

Jae and her husband, Patrick, live on their sailboat full time in Goodland. Jae was a fundamental leader in developing the Purduettes into the premier vocal ensemble that it is today. Throughout her tenure, she traveled with many different PMO ensembles including the 1999 international tour to Australia, Fiji, and New Zealand with the Glee Club and members of the Purduettes, University Choir, PMO Express, and the Black Cultural Center’s Black Voices of Inspiration. She believes that it is important to “give back so that the new generation of students continue to have the same or better opportunities that you had.”

By the end of the performance, it was clear to see that every member played an important part of the ensemble. Not only did they get the crowd to their feet, they used their platform to thank war veterans for all of their contributions to our country. The Purduettes work hard to blend their individual talents together to create marvelous music in unison.

Donations and pledges given to this fund are utilized to support once-in-a-lifetime travel opportunities for the Purduettes. During Jae’s 25 years at PMO, she embodied the favorite adage, “No fun without music, no music without fun,” and truly left an impact on the Purduettes. All those who contribute to this initiative will be recognized in a donor honor roll listed in the program at the Purduettes 75th Anniversary Gala on March 25, 2017.