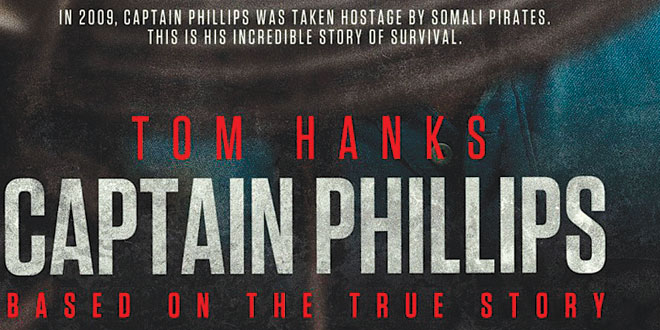 “Captain Phillips” starts quietly enough. Captain Rich Phillips (Tom Hanks) and his wife (Catherine Keener) leave their Vermont home one morning. The Captain is off to Oman where he will take charge of a freighter, the Maersk Alabama, destination Kenya. The ship carries various goods, including relief supplies for those suffering in Africa.

Phillips is a by-the-book, firm New Englander, and he is aware of the threat of piracy as the ship must go past the Horn of Africa where Somali pirates abound. Two small powerboats chase the Alabama, but must turn back. One of them resumes the chase under the leader, Muse (Barkhad Abdi). Phillips takes every precaution, but to no avail as the ship is boarded and taken over by the four Somalis. The Alabama crew is unarmed and attempts to use fire hoses to ward off the pirates, but it’s useless. Muse assumes command and tells Phillips that he, Muse, is now captain. What ensues is endless, fascinating close-up action, as Phillips and his crew play cat-and-mouse to thwart the pirates.

What makes the movie so engrossing is the 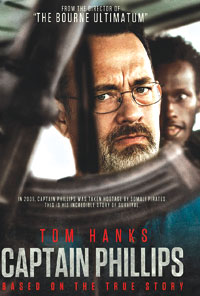 juxtaposition of scenes of the Somalis with what is taking place on the freighter. The Somali pirates are locals who live under the thumbs of local warlords. Some of the pirates are fishermen and others are just criminals. The huge ransoms they collect for captured ships go into the pockets of the warlords. The pirates get very little in this strange (to us) world.

From alongside the Alabama, to on-board, to aerial views the visual images are vivid. The interplay between Phillips and the pirates is compelling, as Phillips runs out of means to stall or prevent having the Alabama taken to Somalia. It winds up being a contest of a quartet of pirates against the U.S. military, particularly the navy and Seals unit. Eventually the force of the navy brings about an ending familiar to most of us who remember the episode.

Make no mistake. This is Tom Hanks’ movie. It’s doubtful that anyone else could convey the emotions and character of Phillips nearly as well. He goes from self-assured, controlled captain to a terrorized hostage aboard a pitching, uncontrolled lifeboat, attempting desperately to save his crew, his ship and himself. How he perseveres is a good story, brilliantly executed.