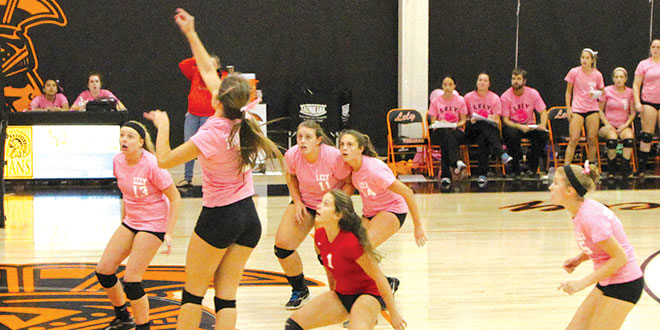 Varsity team covers Ashley as she tips the ball.

Talk about team spirit! Lely High School’s yearly PINK OUT brings out the “pink” in all the students. Pink Out is an evening of volleyball between Lely players and rivals Naples High School. T-shirt sales carrying the Pink Out theme are sold before and during the game.

The JV team lost their bid against Naples High in three games. The games were close though, the last of which was 13-15, Naples High. The Lely girls were ecstatic they played so well and fought so hard. It was definitely not an easy win for Naples High.

Before the Varsity girls played, teammate Alyssa Johnson spoke about her mother who is facing

her second battle with cancer. Survivors were then asked to stand, and team members, carrying roses, ran into the audience and gave them a rose.

Like their JV counterparts, the Naples High Varsity team ended up besting the Lady Trojans in three games. Again, the third game was won by a mere two points.