A popular shelling and camping location, Kice Island turned gruesome as 25 dead pilot whales were found on its beach

Southwest Florida has seen of a number of beach strandings by short-finned pilot whales during the months of December 2013 and January 2014. From Lee County to the Everglades, an estimated 55 pilot whales perished due to these events. A somewhat rare event, beach strandings by marine mammals take place all over the world for reasons which are usually unknown. Yet, these pilot whales make for an interesting case as so many have landed on our shores as of late.

Pilot whales are the second largest member of the dolphin group, just behind orca whales. They average a length of about 12 feet and are incredibly social creatures. They stick together in pods of anywhere from 20 to 90 and can be found in deep waters of tropical and temperate climates, according to the American Cetacean Society. It has been observed that a possible reason for mass strandings is due to the highly social nature of the creatures.

According to National Oceanic and Atmospheric Administration (NOAA), pilot whales are actually the most common species to mass strand and cases have been recorded in the United States as far back as the early pioneering days.

Florida certainly isn’t alone in seeing these mass strandings — especially as of late. On Jan. 6, the Associated Press reported a pod of 39 pilot whales that died after stranding themselves on a beach in New Zealand. Twelve of the pilot whales in New Zealand were found to have already been deceased and the rest were euthanized.

Scientists monitor and collect information through necropsies and other samplings of the dead animals to determine possible causes for the strandings. Currently, Florida’s pilot whales are being examined.

The sad saga of their strandings began in early December when 51 pilot whales were spotted on or near a remote beach in Everglades National Park. After a number of days, 22 perished, and it seemed the rest of the pod made it back out to sea. Some of the whales were necropsied, but, “It takes weeks, and months sometimes, before we can get back all of the analysis. Those whales were in poor body condition so we may not be able to get too much out of them,” warned Blair Mase, NOAA’s SE marine mammal stranding network coordinator, during a media conference call on Jan. 23, 2014.

January’s strandings began on Sunday the 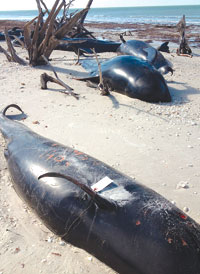 Six of the pilot whales found on Kice Island were necropsied. The rest were too far along in decomposition.

According to NOAA, 14 pilot whales were found either stranded or swimming freely near Lover’s Key State Park the same day. Crews responded and in the end, eight of the whales died, four of which were euthanized. “The eight whales from Lover’s Key were necropsied,” reported Allison Garrett, communications specialist for the NOAA Fisheries Southeast Regional Office. The other six remained unaccounted for after an aerial search.

On Thursday, Jan. 23, a mass stranding on Kice Island was reported by a boater. Just south of Marco, Kice is a popular spot for shelling and camping. That day, 25 pilot whales died — 16 females and nine males.

Overall, “There were a total of 37 whales observed between Kice Island and Lover’s Key (Ft. Myers). Of those, 33 died or were humanely euthanized,” explained Garrett. While all eight of the whales on Lover’s Key had been necropsied, only six of those at Kice Island were. “The remaining dead whales (all from Kice Island) were in a more advanced state of decomposition; therefore, they were sampled, but not completely necropsied,” she added.

Mase confirmed during the telephone conference that it was believed that all of the whales spotted along the coast during those five days were of the same pod. “If they did not strand in this location they would have stranded somewhere else,” she stated, explaining that many were underweight, malnourished and non-responsive upon arrival. Many were already dead and others seemed to float listlessly. “They had been out of their home range for quite a while.”

Pilot whales do, in fact, call the Gulf of Mexico their home, but as Garrett explained, “They typically reside off the continental shelf in very deep waters.”

The mystery always seems to remain as to why these whales strand themselves. “Historically, (strandings) sort of come in spurts where we will get a continual spurt of strandings. It is unusual though. It’s something that we’re looking at. Why we had a stranding occur in December and now here another one in January. I would say it’s unusual, and it’s something we’re looking into and monitoring

From Fort Myers to Marco Island, a pod of pilot whales continued to strand themselves during a five day period in mid-January. Many rescue efforts were attempted. PHOTO BY KIRK GARDENER

Ketten concurred. “There is no good general answer. (Every) stranding may have a different cause. A great many involve human interactions, such as entanglement or pollutants, ship strikes, etc, but equally, they may be caused by disease, particularly viruses or some natural toxin, or aging, amongst many other causes. When you have large numbers of animals simultaneously, the more likely cause is something rapid and easily spread, like a morbillivirus.”

“Marine mammals typically strand because they are sick or injured. Mass strandings, such as those of the pilot whales, may occur because of their cohesive social structure. When one or two whales become sick, the rest of the group may follow those sick individuals to shore and become disoriented and debilitated themselves,” stated Garrett.

Over the years, many have questioned naval sonar testing as a cause to mass strandings, but according to Garrett, “NOAA has heard from the Navy that there was no activity in the area in the week prior to the stranding.”

The Navy has been conducting sonar testing throughout our world’s oceans since the 1970s. Recent studies, however, have been linked to certain stranding cases, one of which the Woods Hole Oceanographic Institution (WHOI) released regarding beaked whales. According to Peter Tyack, senior scientist on the report, “(The study) suggests that beaked whales are particularly sensitive to sound…But the observations on the naval range suggest that while sonar can disrupt the behavior of the whales, appropriate monitoring and management can reduce the risk of stranding.”

This research was supported by the United States Office of Naval Research, the U.S. Strategic Environmental Research and Development, the Environmental Readiness Division of the U.S. Navy, the U.S. Chief of Naval Operations Submarine Warfare Division (Undersea Surveillance), NOAA and the Joint Industry Program on Sound and Marine Life of the International Association of Oil and Gas Producers.

Recently, the Navy has released its “Environmental Impact Statement for Exercises Planned from 2014-2018.” The study, which can be found at hstteis.com, states that sonar testing may cause unintentional harm to 2.8 million marine mammals throughout the next five years.

To be sure, “We do have cases from New England, to the Gulf, to South Africa, to Europe, to New Zealand — essentially in every habitat that pilot whales — of mass strandings of this species,” stated Ketten, clarifying that, “No single clear, common, constant cause has been identified.”