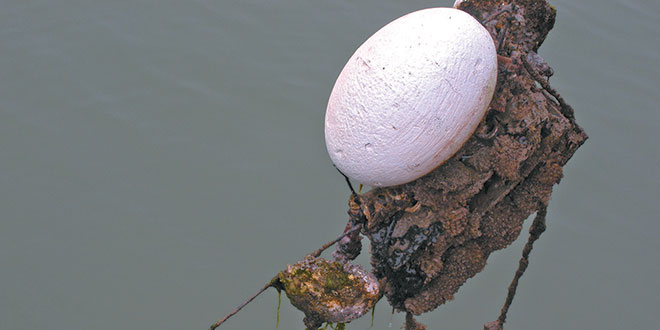 Juvenile fish, crabs, shrimp and lobster have found a home on the sampler-sizedartificial dock habitat at Jim Timmerman’s home.

A pilot project is underway that may turn the murky waters of Marco Island’s canals into transparent, sustainable marine habitats, teaming with a diverse array of fish, shellfish and other aquatic life.

Ocean Habitats, LLC, has installed its artificial dock habitats in canals abutting six homes on the island. The simply designed habitats have are designed mimic mangrove roots in creating a home for organisms, such as larval and juvenile fish, crabs, shrimp and lobster, that consume phytoplankton – microscopic marine plants – that discolor water.

Constructed of fiberglass, PVC pipe, polypropylene rope and crab trap floats, the habitats come in two sizes, standard and the smaller “sampler,” and are installed under canal docks. According to Ocean Habitats, each habitat is able to support 60 different marine species and when fully developed over 18 months, they can clean 35,000 gallons of seawater every day.

Ocean Habitats founder, president and executive director is David Wolff, of Naples, a retired, former real estate agency owner with an academic background in marine biology. He recalls the waters around Marco from decades past, before the island was full developed and when it was possible to peer downward and see oysters on the bottom of Smokehouse Bay. Wolff said he began working on the basic concept of the artificial dock habitats when he was in college, but never “took it to the next level.”

Wolff said that once born, larval fish, crabs, shrimp and lobster can only swim for 12-to-24 hours without finding a place that provides the food, shelter and safety they need to survive, such as the artificial dock habitats. The smaller fish and crustaceans ultimately attract larger fish that feed on them and the improved habitat will also lure varieties of fish not normally seen in the island’s canals today, he added.

Cleaner water can also allow for the growth of the sea grasses that provide important aquatic habitat.

“We’re trying to help the life cycle, that was interrupted and which was impeded with the concrete seawalls and docks, after the removal of natural environment for development,” said Wolff. “It’s not a real quick process, but water quality improves year after year.”

The habitats are manufactured in Detroit, but all of the research is being conducted on Marco Island.

Jim Timmerman and “Shadow” show off the artificial dock habitat outside his home. Photos by Don Manley

for a pilot project that includes about 35 habitats, said Jim Timmerman, chairman of the city’s Waterways Advisory Committee. The price includes installation of the habitats and monitoring them to determine how they are performing.

It was Timmerman who brought the habitats to the attention of the Waterways Advisory Committee, which after investigating them, ultimately voted to recommend city council approve the expenditure.

He has had two standard size habitats and a sampler, which is about one quarter the size, installed behind his home for almost one year and he described the results as being “absolutely phenomenal.” They were installed last July, shortly before Timmerman and his family left for a month-long vacation in Maine.

“When we got back, we noticed a significant difference in the types of fish,” he said. “It’s amazing to see not just how they work, but how quickly they work.”

He said his son, Noah, 8, used to only catch catfish and sheepshead from their backyard and now red snappers, snook and other fish and crustaceans, not seen for a long time, are present.

“I’m putting my shoulder behind it because I would love to leave these canals in as good a condition as they can and should be for my children, other people’s children and all people that enjoy Marco Island,” Timmerman added.

Timmerman said he first became aware of the artificial dock habitats about six years ago, at a trade show, where he was promoting his company, Dynamic Seawall Maintenance System, Inc. He found the technology interesting and followed Ocean Habitats since then, as the company rode out the economic downturn. He said he decided about 18 months ago to test the products at his home before approaching the city about getting involved.

The habitats have not been deployed at the other dedicated test sites, which are located along a canal that runs between Elm and Perrine courts. Timmerman said he hopes they can be installed this spring.

Marco will serve as the first large-scale deployment of the habitats and demonstrating their effectiveness on that basis is something Wolff said will prove valuable as he markets the product. “Marco Island is giving us the chance to do that, which we’re really excited about,” he added.

For more information about Ocean Habitats, LLC, and its artificial dock habitats, email Wolff at reefdoctor1@gmail.com or call 786-520-6459.