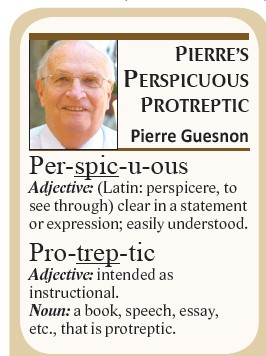 adjective 1: allowing or characterized by latitude in opinion or conduct, especially in religious views. noun 1: a person who is latitudinarian in opinion or conduct. 2: Anglican Church. one of the churchmen in the 17th century who maintained the wisdom of the episcopal form of government and ritual but denied its divine origin and authority. Pierre Guesnon is a retired engineer who founded and ran an engineering company in Boston for many years, until he retired fifteen years ago. Since then, he has lived most of each year on Marco Island. He is married to an Australian, Margaret Guesnon, whom he met in London and married in Sydney. They have two daughters. Pierre has had a lifelong interest in words and language.