Pickles on my Doorstep 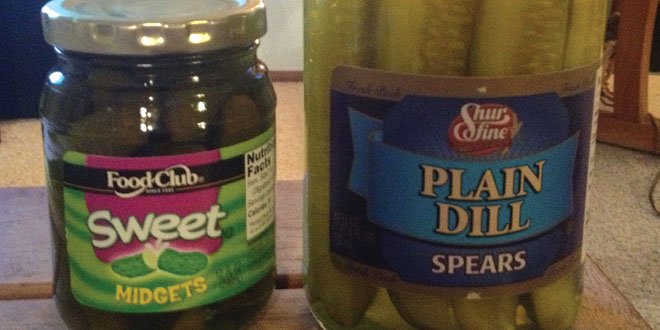 Strange things happen in Goodland. But by “strange” I don’t mean bad – not by any means – just unusual, out of the ordinary, whacky, crazy, funny, “You can’t make this s#@! up,” kind of stuff. Here’s a good story that is completely true and completely odd.

Late one evening, I opened my front door for a reason of which I can’t recall. Whatever it is that I was doing, I stopped in my tracks when I noticed something strange on my front doorstep – two jars of brand new, unopened pickles. One a sweet; the other of the dill variety. One a “midget,” as it was called; the other a spear.

I looked around, assuming “The Pickler” would be running away in the distance, snickering all the way. I wanted to hunt The Pickler down and ask, “Why?” But I saw no one. No movement. Nothing. Just your typical quiet Goodland night. But the pickles, not so typical.

I quickly snapped a photo, slapped it on the old Facebook and asked, “Has anyone ever found pickles on their doorstep? Because I just did.”

Merely minutes later a reply: “Yes, I did too!” came a comment from a neighbor only a few doors down. We pondered back and forth. Who would do such a thing? Why? Do they think that the two of us are particularly fond of pickles? And if so, why not leave a note? At least let me no where to send the thank you(?) card. We online “lol’d” and moved on with our day.

Just a little later, Miss B.B. Wrinkles and I headed out for our morning walk. 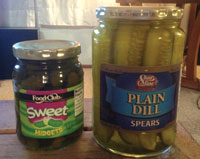 We didn’t get very far before we ran into a friend/neighbor and stopped to say hello. We chatted for a moment about the usual – it’s beautiful out, Goodland is so awesome, we are so lucky to live here, we love the sounds of the woodpeckers in the morning and the night blooming jasmine is just divine, etc., etc. – and then my neighbor asked of me a curious question.

“Hey, I found a couple of jars of pickles on my porch this morning. What do you think that’s all about?” Gasp! The Pickler paid yet another visit!

One person who was pickled on the very first day was even re-pickled just a few days later.

The Pickling started to get dangerous when an unsuspecting victim’s “assets” were nearly damaged as he went to sit in his car. Plopping down, he sat on – you guessed it – a jar of pickles! Lucky for him, the jar remained intact.

As for any other victims of The Pickler, I’m unaware. But feeling quite certain that it was a fellow Goodland pickling the town, I ate my sweet midgets and dill spears without fear.

However, the questions still remained. “Why?” We asked, “would someone leave edible, unopened pickles on our doorsteps?”

We were perplexed; we were pestered; and we were impatient. We needed answers!

When suddenly the answer was there, as if appearing to us out of our bright blue cloudless skies. As for The Pickler, one of Goodland’s favorite musicians summed up “The Pickling” with one of his favorite quotes: “Why wouldn’t ya?”

And we all sat around, eating our jars of pickles, satisfied with the answer.