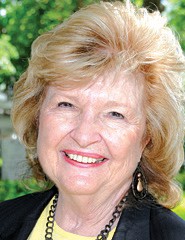 Have you heard that work is just about completed on the building of an ark like the one we read about in the Bible? It has been constructed in Kentucky, and is ready for a grand opening. The reason I know a little about this is because some of my Amish family have taken busses down there to assist in the building of the ark, and as you know, the Ohio Amish are some of the best wood-craftsmen in America. Our own Wayne builds with timber, and makes gorgeous hunting lodges, etc. He worked on the ark for many weeks to help. I just thought you would like to hear that little bit of interesting news.

• Goodlanders! Good news is on its way! The Goodland Drive Water Main Replacement will begin construction shortly. It will be voted on Tuesday, April 25 (as you can tell, I’m writing this before the meeting, and I’m hoping it will receive the votes needed at the meeting so the project can commence). The County promised they would not proceed until after April 16th, the end of season. If all goes well, the bid should be awarded and the County contractor can begin the process of removing the 36-year-old water main that has had numerous breaks. This water main is located in a low tidal area and the valves and fittings have deteriorated due to aggressive soil conditions. This is the only potable water main serving Goodland. The replacement pipe will be installed at a depth of 10 feet, primarily using directional drilling, minimizing the number of valves and fittings required. At this new depth, the newly installed pipe should be unaffected by future rehabilitation of Goodland Drive. The County Public Utilities has coordinated with the City of Marco Island and the Transportation Division to address all foreseeable conflicts with this mission-critical, public health and safety project. The required right of way permit was issued by the City of Marco Island, has been paid for by the county and is ready to be picked up by the contractor upon commencement of construction. Annual operating costs for this replacement are expected to remain the same or decrease. Thank you everyone for working with the County to make this essential replacement a smooth operation. Let’s hope the weather works with us as well.

• A little book was written about yours truly and presented on April 13th to a small group of people at the book signing at The Arlington. The most important note is that any profits from the sale of the book will be directed to the East Naples Kiwanis Club Foundation to be dedicated to the underprivileged kids in East Naples, from nursery school on up. It’s a small book, so the profits will not be huge, but at least they will help. And, if you ever feel as though you would like to help these kids, you can always donate to the East Naples Kiwanis Foundation as well. We all know we can send donations to the organizations in Immokalee and also wonderful Grace Place in Golden Gate, but there was never a place to donate financially in East Naples. Well, here is it. You don’t need to buy a book, but…if that interests you, Ace Hardware on US 41 East, close to Perkins, has invited our Kiwanis Club to host a hot dog sale and book signing at their store on May 6TH from 10 AM to noon. The name of the book? “Donna Fiala: The People’s Commissioner,” and it’s $10. There is also an additional soundtrack of comments and little Tidbits available if you are interested. Any proceeds after paying for the printing will go to the children of East Naples through the East Naples Kiwanis Foundation.

• Recently the County Manager, Leo Ochs, and I met with the Governor at the Governor’s Mansion. We had no idea what to expect or why we had been invited. The Mansion was warm and friendly and inviting…not at all ostentatious or overstated. You walked in and immediately felt at home. There were 48 people who attended, and the Governor knew every person’s name and a little about their background. When we walked out of there we were humbled by the evening. Never once was a political stand or politics even mentioned! It was like you went to his house for a dinner party, and he was your next door neighbor. He never spoke of his job, or of the legislature. What a nice man!

• And now we come to Pickleball! Yes, as of Sunday, April 23rd, 1300 registered players had arrived at the East Naples Community Park on Thomasson Road, coming from 46 states and 12 countries! Those who were here last year were just amazed at the transformation of the park from last year. The new players had heard about the park and traveled far and wide to see it for themselves. They kept saying the new shade structure was the talk of the country and there is nothing else like it in the world! The pictures of the structure have been traveling through social media and exciting people everywhere. One fellow from the Canary Islands (A territory of Spain, 60 miles west of Morocco) said as he drove up he got goose pimples because the sight was so thrilling! Once inside it was hard to contain his excitement. A man from Japan came back for the second time and was totally amazed at the new additions to the park (and we thought it was so great before!) Our Tourist Development Department was responsible for funding that amazing Shade Structure, and the other changes came from “Pickle Ball for All,” and the Parks & Recreation Department, and the U.S. Open team itself. I just must mention these dynamic people by name: Jim Ludwig – the spark that started it all, Terri Graham and Chris Evon from Spirit Promotions who got bitten by that spark, and who brought expertise and dollars to make it happen, and Carol Caefer, Jim’s wife and glue that holds it all together! A greater team you could never find! And then we have Minto, the developer of Isles of Collier Preserve, who sponsored the event last year and again this year, and has stuck with them from the start and believed in what these people were doing! Now, at this event, Minto is announcing their newest project: Margaritaville. Of course I’ve already mentioned the county’s Convention and Visitor’s Bureau (the tourism department) who poured money into making this the Pickleball Capital of the World! Who would have guessed?

• Last, but not least: Congratulations to the Lely High School Entrepreneurship team! Their team, “Bait Up,” won the final pitch competition, and Lely was also very well represented and placed in the final results. We are proud of the class and all of their products, knowledge and accomplishments! They worked so hard! Give them a pat on the back.