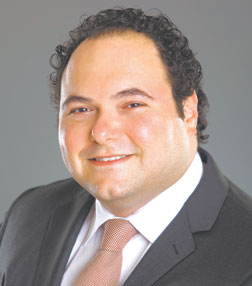 Marc Guttman, D.O. is the newest physician to join Naples Urology Associates, a division of 21st Century Oncology. Dr. Guttman is originally from Brooklyn, New York and claims, “it is a melting pot where every block is a different country.” At one point in his life Dr. Guttman thought he might go into a financial field, but listened to his intuitive intellect, and set a course for medicine instead.

Dr. Guttman received his undergraduate degree in Biology in Brooklyn College Scholars Program, Honors Academy CUNY. He then attended the New York College of Osteopathic Medicine, where he received his Doctor of Osteopathic Medicine. Dr. Guttman completed his internship at Maimonides Medical Center and Lenox Hill Hospital in New York. After another four years in surgery and urology in Philadelphia at the Albert Einstein Medical Center and Hahnemann University Hospital, Dr. Guttman describes his training years as providing a good, well rounded experience although city work often felt like a war zone.

“I enjoy general urology. At 21st Century Oncology we offer the utmost care for our patients using the best medicine and the latest technology has to offer. “

Dr. Guttman investigated 13 locations where his family could make a long term home before making a decision. Dr. Guttman and his wife, Sheryl, have two little girls, Sabrina, age five and Chelsea, age three. “It took me exactly six hours to say yes to the move to the Naples/Marco Island area. It is my goal to become the go-to person for urological issues for East Naples and Marco Island. I want to invest myself, my time and my practice in this area. Naples Urology Associates and 21st Century Oncology offers individualized boutique style care with the very latest treatment modalities.”

Dr. Guttman has written and contributed to several published scientific articles and has spoken at several international medical society meetings. He gave a lecture this week at Physician’s Regional Hospital addressing the recent controversy over Prostate Cancer Screening and PSA. According to Dr. Guttman, “the real question is do you want to know whether you’re dealing with cancer or not? Many things can cause an elevated PSA level, it doesn’t have to be cancer. All the PSA tells us is that we need to check. Since PSA testing began, there has been a 30% decrease in mortality. With regard to prostate cancer, it’s all about quality of life. There are three main areas to be concerned about: cancer control, erectile dysfunction and voiding dysfunction.”

“With regard to benign urological disease or cancer treatment, we use cutting-edge technology with all the newest treatment modalities. Whether it be GPS guided radiation therapy, robotic surgery, plasma energy or laser prostate vaporization, just to name a few, we have the most advanced equipment and most compassionate and thorough personnel available anywhere.” Call 239-434-8565 for information and an appointment.

Dr. Guttman’s Marco Island office is located in Royal Palm Plaza at 973 Collier Blvd. and his Naples office is located at 8625 Collier Blvd. at Rattlesnake Hammock between the bank and Publix shopping center. His next few lectures will be at the Golden Gate Community Center, February 27th from 11AM-12PM, titled “Prostate Cancer, What Every Man (&Woman) Should Know”, and “Treating Incontinence in Men & Women” scheduled on March 7th from 3 to 4:30PM at the NCH Downtown Hospital campus, in the Telford Auditorium.