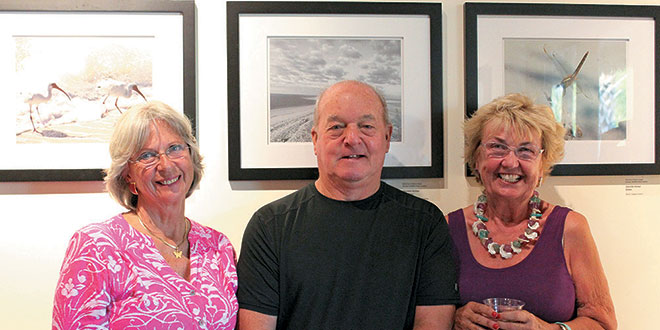 After a three weeklong entry window, the 9th Annual Amateur Wildlife Photo Contest came to a close. The yearly competition is co-sponsored by the City of Marco Island, the Marco Island Historical Museum and the Coastal Breeze News.

On May 13th, the winners and their families gathered at the Marco Island Historical Museum for the big reveal. The reception, which was catered by Stonewalls, was well attended. Winners were able to discuss their technique with interested parties and bond over camera preferences. The winning photographs were framed and hung on the wall for all to see, and

Jasmine Parcelles with her winning photograph, “Dolphin at Sunset.”

will be on display at the museum through June. Winners received a plaque as well as Coastal Breeze News collectables.

The rules were simple, all entries needed to be taken within the last 12 months and only photographs of indigenous plants and animals were allowed. But more importantly, the photographers needed to be amateurs—meaning that they have not received compensation for their photography. The contest drew more than 50 entries from talented locals, making it difficult for judges Barry Howe, Andrea Cooper, Pat Rutledge and Donna Kay to narrow it down to just seven winners.

After much deliberation, however, it

was decided. Jasmine Parcelles won for Landscape, Charlette Roman for Insect and Black and White, Doreen Hertel for the Land Animal and Bird categories, James Hobbs also for Bird, and Amy Tripp for Marine. Congratulations winners!

Plans are already well underway for the next photo contest that will take place in the fall. So photographers, get ready!

The Marco Island Historical Museum is located at 180 S. Heathwood Drive, Marco Island, and is open Tuesday through Saturday from 9 AM to 4 PM. For more information call 239-642-1440 or go to www.themihs.com.

To see more photos check out the Coastal Breeze News on Instagram: coastalbreeze_news.