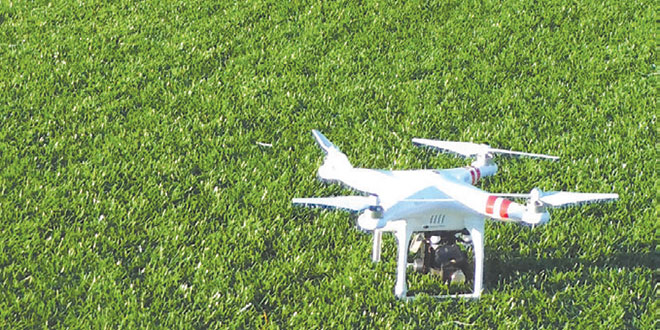 As runners at the Lely Cross Country Invitational revved up, so did Chris Black and his Phantom 2 Drone. The drone, with a GoPro camera, circumnavigated the cross country course to give an additional enhancement to the event. By Florida High School Association rules, the drone can hover up to 400 feet above the subject.

Sean Duffey, race timer for Gulf Coast Runners, was recording times at the meet. “It benefits the runners,” he said. “It gives a different perspective. Very cool at the finish line.”

Black first purchased a drone for his personal use, then earned a grant for another drone for school use. “The drone is being used at the school in TV production for discovery education, like marine biology,” he said.

The Phantom 2 Drone flies over the Lely High School track as it records the LelyCross Country Invitational.

“It is also used to capture school events. There are many options for school use.”

Black uses his drone for “vacation, anytime I want to get a good aerial video for my own pleasure.” He also used the drone to give the city of Marco Island aerial views of its recreational properties.

Reactions to seeing the drone are immediate, Black said. “It becomes the center of attention,” he said. “It’s different and fun.”