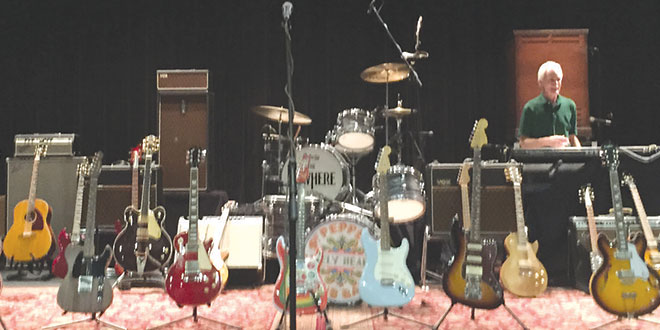 Modern Marco Island’s half century of existence will be commemorated with music at the 50th Anniversary Concert in the Park, set for November 21 at Veterans Community Park.

Based in Southwest Florida, The Nowhere Band brings the Beatles’ material to life for audiences by blending authentic period costumes and vintage instruments, with modern lighting and expert musicianship unaided by pre-recorded tracks. Thanks to advancements in technology and the skills of keyboardist Karkey Karkalits, the band is able to perform songs that the Beatles could never play live.

Thanks to the wizardry of producer and arranger George Martin, the Beatles revolutionized studio recording, being among the first to use the multi-track process, synthesizers and the Mellotron.

Karkalits’s keyboard-provided orchestral flourishes and sound effects allow The Nowhere Band to have a catalog of about 120 songs that it can perform. “And we continue to learn more songs,” said the group’s founder and drummer, Dave Radford, of Fort Myers. “So many songs were never intended to be played live,” he said, citing “A Day in the Life,” “I Am the Walrus” and the “Abbey Road” album as examples. The band also performs selections from the solo careers of Lennon, McCartney, George Harrison and Ringo Starr.

Formed in 2006, The Nowhere Band plays 80 to 100 shows a year, most of them in the Southeast, but only sporadic dates in the Marco Island and Naples area, most of them private events. Radford said the band is looking forward to the 50th Anniversary Concert in the Park.

“You pick a lot of energy up from the people from a big event like that,” said Radford. “It’s fantastic. We’re glad they selected us. We’re going work hard to live up to expectations.”

During season Jim Long, who performs solo here, is a fixture at CJ’s on 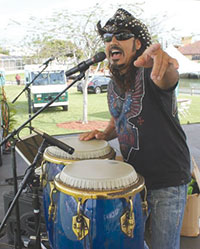 the Bay and the Marco Island Marriott’s Quinn’s on the Beach. But during the summer months, he can be found about 1,000 miles away, in another beachfront resort community, Ocean City, Md., where he leads the Jim Long Band. The three-piece group is in its 20th year as the house-band at one of that city’s most popular waterfront nightclubs, Seacrets.

Whether up North or down here, Long is nothing if not versatile where musical styles are concerned.

In Ocean City, its straight-up rock ‘n’ roll. “Being that we are a beach party band, we do every kind of music,” he said. “We are a classic rock and southern rock band. That’s pretty much our flavor, 70s rock, 80s, classic rock.”

That musical palette is broadened for Marco audiences.

“I’ll do Frank Sinatra, then I’ll do Lynryd Skynyrd and then some doo wop,” said Long. “I do it all on Marco Island. I’m pretty good at changing my voice to sing music from these artists.”

The New Castle, Pa. native has been performing professionally since the mid-1970s, when he joined his first band. After graduating from high school, he hit the road, making music his career. Over the years, he’s performed on “Star Search,” “Be A Star,” Charley Daniel’s country version of “Star Search,” and he once worked the phones with Monte Hall of “Let’s Make a Deal” fame for a Philadelphia telethon.

Long, 54, was also a fixture in Atlantic City for many years before he and his wife, Joy, and their four young daughters: triplets Liberty, Danyell, Brooklynn, now 12; and Savannah, now 13, moved to Marco.

The family came to the island by chance, discovering it as they followed their usual wintertime routine of travelling in a motor home.

“We’d thought about relocating to Florida and that’s how I stumbled on Marco,” said Long. “It was going to be time for my girls to go to school and we wanted to stay in a warmer area and not travel in a motor home.” Cape Coral or Fort Myers were under consideration, until they crossed 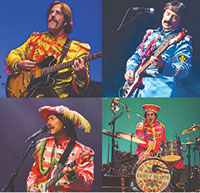 the Jolley Bridge and discovered what Long described as “paradise.”

Today, the Long’s daughters attend Marco Island Charter Middle School. He also has an older daughter, London, who resides in Goodland with her husband James Pyle and their daughter Lucy.

Long usually plays Thursday afternoons and the occasional Saturday at CJ’s on the Bay, located in the Esplanade Shoppes. He’ll also be at Quinn’s again this year, but is unsure of what his schedule will be.

The 50th Anniversary Concert in the Park will be the first Marco date in several months for Naples-based bluesmen “Little Eddie and The Fat Fingers.”

Being selected to play such an important event in the city’s history is a thrill, said vocalist-guitarist Ryan Bladen, aka “Little Eddie.”

“As musicians and artists, it’s always an honor to be asked to perform at such an important occasion,” he said. “We are all very grateful to be doing what we love and getting to share that feeling with others.”

The band plays a few originals, but primarily concentrates on putting its twist on tunes penned by blues greats ranging from the early 1930s, such as Blind Willie McTell, to the 40s and 50s music of Willie Dixon, to late 1960s and blues-based artists such as Jimi Hendrix.

Despite its beginnings in the rural farmers’ fields of the South, through its maturation in the inner-city nightclubs of the industrialized North, blues music has shown itself to be accessible to a wide variety of people in this country and overseas.

Few people today can relate to the social setting that produced blues, but the topics it addresses are universal, said Bladen.

“Feelings of sadness and loneliness and heartache, and the fact that sometimes life just isn’t nice or fair, these are feelings everyone, for the most part, can relate to and have felt and have, at one time or another, had to overcome,” he added. “The blues, as music, is all about energy and I think that energy comes from the ‘overcoming’ of whatever the obstacle may be. That’s what people love about the blues, whether

Little Eddie and the Fat Fingers

Not surprisingly, there’s an interesting story behind the band’s distinctive name.

When he was younger, Bladen worked with his construction contractor father, Eddie Bladen, who, along with his employees, referred to him as “Little Eddie.” The nickname somehow came up during a band gig in 2007, and so “Little Eddie” it was, among his bandmates. A few days later, Ryan Bladen injured his hand on the job and he had to play a show on Fifth Avenue in Naples with a swollen hand and fingers.

“Marc Ferris, our harmonic player, said, ‘Look at Little Eddie’s Fat Fingers,’ and we had, by then, gathered a huge crowd which roared with laughter and applause and the name stuck,” said Ryan Bladen.

The MICMS Jazz Band, under the direction of school instrumental music teacher Martie Miller, will open the show and Marco-based DJ Steve Reynolds will serve as MC for the event.

Samantha Malloy, the city’s community events coordinator, was part of a committee that selected the concert lineup.

“We had received suggestions from the Parks and Recreation Advisory Committee, a couple of members of city council, family and friends, and other members of the community,” she said. “Blues, jazz, and oldies were very popular suggestions. Our very own local middle school just so happens to have a jazz band. We thought what a perfect way to showcase their talent and get them involved in this community event.”

Malloy said including local favorites such as Jim Long and Little Eddie and the Fat Fingers was a must. “Lastly,” she said, “we thought how fitting it would be to get music from 50 years ago and when we heard about The Nowhere Band, we knew they would be perfect.”

50th Anniversary Concert in the Park, sponsored by the City of Marco Island and

Refreshments: Food and drinks will be available for

discouraged for this event