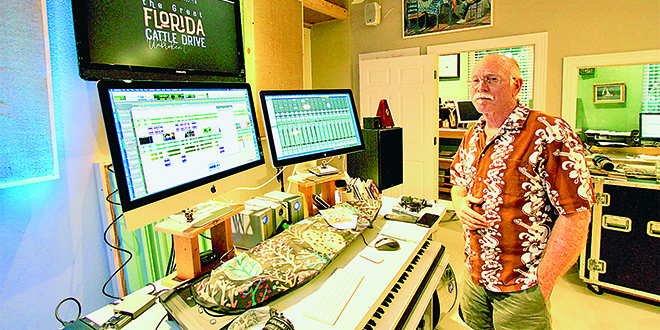 Photos by Scott Shook | JRobert in his state-of-the-art home studio.

Marco Island’s reigning Artist of the Year, JRobert Houghtaling, is excited for the debut of the PBS documentary, “The Great Florida Cattle Drive: Unbroken Circles.” Houghtaling composed the score for the hour-long special—an honor the venerable musician considers the highlight of his outstanding musical career.

“This is it, man. This is the one I’ve been waiting for,” Houghtaling said. “I really enjoyed working on the Rookery Bay project and I really enjoyed Apalachicola,” he said, referring to previous projects. “But to do a PBS special on something that’s really near and dear to my heart…it’s just been a thrill.”

Houghtaling is a fourth generation Floridian who grew up in the cattle country of Ruskin.

Houghtaling flew to Tallahassee on February 16 for the red carpet premier of the documentary.

One of the highlights of the PBS project was working with Grammy award winning artist John McEuen of The Nitty Gritty Dirt Band in Houghtaling’s home studio, where the entire music score was produced.

“The best treat I’ve had is inviting John McEuen in here. It’s like having Paul McCartney in here—only better,” Houghtaling mused. “I’ve been following him for many, many years. It was really cool.”

Houghtaling was also happy to have his talented son Martin appear in the music score.

Houghtaling has spent six to eight months working on the documentary, in addition to his “regular gigs and a few other tiny video projects.”

“When you get into these projects it’s consuming,” Houghtaling said, quickly adding, “it’s a wonderful consumption, too. I’m really happy with this project. I like working with these people.”

The opportunity came along at the right time for Houghtaling, who has been in the music business for over 50 years—the past 30 of those on Marco Island. He’s glad it didn’t happen earlier in his career.

“I could not have done this earlier in my career,” Houghtaling said, from the elaborate home studio that he built himself. “I didn’t have all of the tools. I started with that 1968 D35 (Martin) over there and a fiddle. I also didn’t have the experience. I had the songs under my belt. But I didn’t have the latest in recording technology. I didn’t have the collection of microphones I have now. It’s taken years to get to this point. With these tools you can do anything if you have the equipment.”

And Houghtaling has the equipment. “I have a bunch of cool guitars. They just feel so good.”

The documentary, produced and directed by Elam Stoltzfus, tells the story of the Great Florida Cattle Drive 2016, the history of Florida’s heritage cattle breed, how they almost went extinct and what folks are doing to preserve Florida’s cow culture for future generations.

Houghtaling was charged with developing the music that would carry the documentary along.

“I was very honored when they asked me to do this,” he said. “I made a list of old folk songs and early cowboy songs that would reflect the images on the screen. Then I had to find out which ones were in the public domain so I could work with them. For each scene I would write a three-to-four minute song. Then I’d slice and dice it and weave it into the story. Basically you have a great story of the cattle drive and a history of cattle in Florida. He’s got some great images. He’s composing the story with his images. They have a great narrator named Baxter Black whose voice is just perfect for this project. So I’m like the third leg of the stool. To make the stool seat properly you have to have this music. If it does nothing else, it carries the project along.”