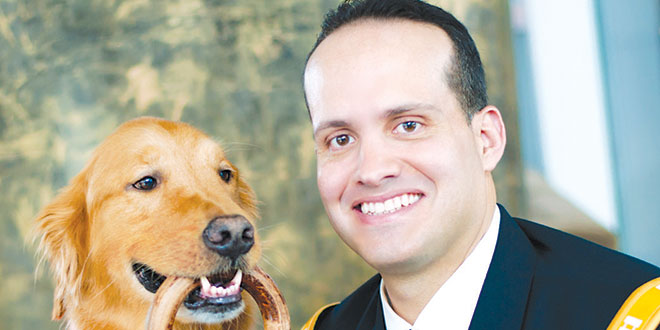 People often ask how they can help our returning veterans or how they can make a difference. It’s sometimes hard to know exactly what to do as many veterans don’t show outward physical disabilities but rather suffer from invisible wounds like post traumatic stress disorder (PTSD) or traumatic brain injuries. PAWS Assistance Dogs directly impacts the needs of many combat wounded veterans by training and providing assistance dogs free of charge. They do this with the support of donors and sponsors, and with this campaign — through book sales.

PAWS has partnered with New York Times best-selling author Captain Luis Carlos Montalván in an effort to raise awareness of the issues facing veterans and the positive life-changing impact service dogs can have.

Montalván and his service dog, Tuesday, are offering signed and “paw-tographed” copies of their international award-winning books through the PAWS Assistance Dogs website. The proceeds of every purchase of “Until Tuesday: A Wounded Warrior and the Golden Retriever Who 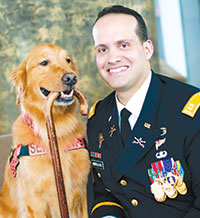 Saved Him” and “Tuesday Tucks Me In: The Loyal Bond between a Soldier and his Service Dog,” will go directly to fund a greatly needed service dog. There are no limits to quantities ordered and books can be purchased online.

Montalván knows all too well about the wounds of war. The 17-year U.S. Army Veteran served multiple tours abroad and was decorated with awards including two Bronze Stars, the Purple Heart, the Army Commendation Medal for Valor, and the Combat Action Badge. In 2007, Montalván honorably departed the military and in 2010 completed a master’s of science from Columbia University’s Graduate School of Journalism. He is now an international award-winning New York Times bestselling author, speaker and advocate. Tuesday, his beloved service dog, is the recipient of the 2013-14 American Kennel Club Award for Canine Excellence. 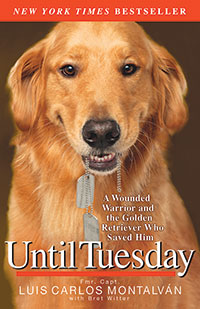 in 2012 and was a finalist for an APA Audie Award. Montalván is also the recipient of a 2011 Voice Award and 2011 Invisible Hero Honors Award for his efforts to educate the public about trauma and the real experiences of veterans and all people with disabilities.

“PAWS Assistance Dogs promotes independence for combat wounded veterans and others with life-changing disabilities through partnerships with skilled assistance dogs,” says Jeannie Bates, founder of PAWS Assistance Dogs. “PAWS dogs are always trained and placed at no cost to those they serve. Our extraordinary golden retrievers are the common denominator in all our work.” 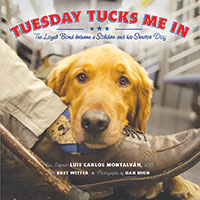 [/caption] alt=”B3-CBN-1-8-16-6″ width=”200″ height=”200″ />Joe Kashnow, a recipient of a PAWS assistance dog and U.S. Army Veteran, was deeply affected by combat. While on patrol in Iraq, he stepped on a land mine and lost his leg. Joe’s life changed in an instant. Faced with balance and mobility problems, plus PTSD, he felt hopeless for any meaningful future. That’s when PAWS stepped in to partner Joe with “Chico,” his service dog. Through Chico’s love, devotion and stalwart assistance, Joe recovered and found a new passion. Joe’s life has been restored through comedy performances and motivational speaking. This was made possible by Chico, who stands side by side with Joe, restoring laughter and inspiring others.

“Having a bestselling author and his beloved service dog support our mission is very inspiring,” says Bates. “We’re so very privileged to have such passionate friends who understand our mission firsthand and what we are trying to accomplish with our service dogs.”