What are your political views?

My views? Well, from my vantage point (mostly television), all the major candidates are actually quite attractive. Now, I’m not gay (not that there’s anything wrong with that), but the views from my couch are not too bad.

Nobody can work a suit and tie like President Obama. Joe Biden has really big teeth and an equally fetching smile. And if this run for office doesn’t work out, Romney and Ryan could easily be models for Abercrombie and Fitch Senior.

Once you look beyond their grooming habits, (though I still think my stylist, Trisha from Critter Café, could work wonders on Biden), there’s a treat for almost every taste in this year’s candidates. Most important, it’s quite clear that the President’s dog, Bo, has a pretty big say in setting national policy. Think about it—isn’t one of them usually tailing the other or vice versa?

Though some may claim to support, for example, the GOP, I always support the DOG.

However, if news reports are correct and Mitt Romney once stuck his dog, Seamus, in a kennel and bound it to the roof of their vehicle for a lengthy car trip and Paul Ryan tied his dog’s kennel to a pair of skis before 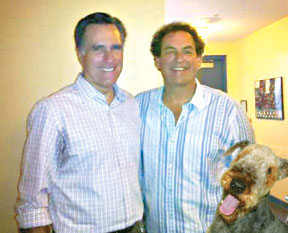 Tony (with Short Daddy and “friend”) travels in some very auspicious circles.

sending both kennel and dog down a mountainside, I’m conflicted.

On one paw I’m thinking, “Oh, no, he didn’t.” But on the other paw, considering my household’s oppressed sense of adventure, I realize, “My life is boring—let me in on some of that exhilarating right-wing pup action!” Of course, my Short Daddy briefly met Mitt Romney last January and now he acts as if he has Candidate Romney’s personal cell phone number on speed dial. Truth be told, Seamus Romney wouldn’t take Short Daddy’s call.

However, if Animal Planet would wise up and host a debate, I’d be better informed on the issues. After all, when it comes to American politics, it’s a dog-eat-dog world.

My humans and I are natives of Canada and, as we now live in the States, we are considering a visit to Southwest Florida. As “foreigners,” do you think we’d feel welcome there?

Visitors from all countries are welcome here in Southwest Florida. Why, just the other day I saw a Welsh Terrier frolicking with an Australian Sheepdog at the Marco Dog Park. Marco Islanders, in particular, are a very progressive people even if they don’t let the dog population on the beach—but don’t get me started on that topic or we’ll be here all day…

Our country is, in general, in favor of “foreign” dogs. Mitt Romney has an

Maple is ready for the Sunshine State. SUBMITTED PHOTOS

Irish Setter. President Obama has a Portuguese Water Dog. Joe Biden has a German Shepherd and, in a handful of unsettling photos, Paul Ryan looks just like a Mexican Chihuahua.

Take me for example: my superior breed originated in Airedale, a geographic area in Yorkshire, England—and everyone loves me.

But I have a—wait for it—pet peeve when it comes to you Canucks. We are all about being hospitable here in Florida—but we do not talk “a-boot” anything.

Maple, in Florida, “a boot” is something a human wears on his or her foot. “A-boot” is not an adjective (meaning: of; concerning; in regard to) or an adverb (near in time, number, degree).

Yes, preparing yourself linguistically for your vacation to Florida might require a little extra effort, but it will be worth it. Just enjoy the process. (that’s pros-es, not proh-ses). Eh?

Tony Wakefield-Jones is a 10-year-old psychologically gifted Airedale. He can be found on Facebook at facebook.com/tony.wakefieldjones. A member of a family of creative minds, his Short Daddy, writer Randall Kenneth Jones, has humorously chronicled his own personal and professional foibles on attackbunnies.com