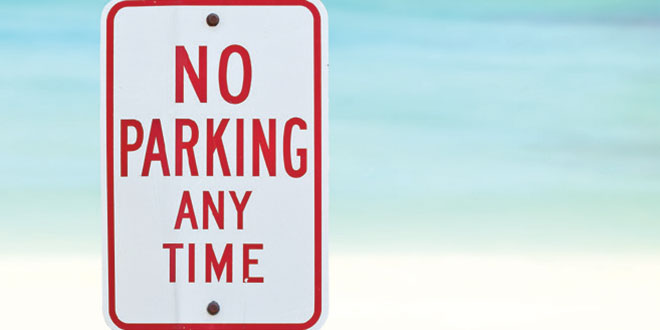 Driving down Collier Boulevard, I sang along to “Big Yellow Taxi,” one of my favorite tunes by Joni Mitchell: “They paved paradise and put up a parking lot.” The lyrics made me think about Marco Island. We have put up some parking lots, although fortunately, we have not completely paved our little piece of paradise. But, alas, this paradise does seem to have some parking issues, taking on many different faces in many different places.

It seems that parking has always been an issue on Marco Island. In 2012, there was a beach problem associated with parking in the swales on Swallow Avenue in the South Beach area of the island. Residents in that area complained of swale damage, unsightliness and litter. Those swales eventually became enforced “no parking” zones, and much of the issue was resolved by the addition of the beach “Turtle” private (pay to use) parking lot on South Collier Boulevard.

With that problem behind us, we are still faced with the issue of limited parking on Marco Island. Old Marco and other areas have experienced a parking problem particularly during the busy season. At the March 4 City of Marco Island Planning Board meeting, a request on behalf of the Old Marco commercial property owners and restaurateurs was granted to delay a decision regarding swale parking in that area until after the season. At that meeting, City Manager Roger Hernstadt said he would like to see a decision in June at the latest.

The issue resurfaced again in part at the April 4 City Council meeting when a resolution was presented to direct the city manager to ensure restaurant compliance with fire code and building and zoning regulations, with parking being one of those regulations. The resolution, as presented, did not pass, but the council did direct the city manager to request information from Marco’s business owners regarding zoning certificates, seating and parking.

Coastal Breeze News spoke with City Manager Roger Hernstadt to further grasp the scope of the island’s parking dilemma. Hernstadt stated that the parking issues are not limited to commercial properties, but extend to residential properties as well. Last year, following a staff report, the city council voted to temporarily waive during the holiday season the enforcement of vehicles blocking the sidewalk overnight between the hours of 10 PM and 6 AM from December 9, 2015 through January 4, 2016. This potentially created two more parking spots per driveway for visiting families and friends during that busy time. This was a big help for residents with holiday guests. But Hernstadt did add that single-family homeowners can modify their driveways to permanently accommodate more parking, making it easier for them to address the problem than commercial property owners.

City Manager Hernstadt made an important point. He said “People associate parking problems exclusively with on-island density, but off-islanders that spend the day here still use our amenities daily, and this will present a growing challenge, particularly with the continued growth on the 951/41 corridor.”

Mitchell’s song concludes, “Don’t it always seem to go that you don’t know what you’ve got ‘til it’s gone?” I think it is safe to say that Marco Island knows it has some parking challenges, but it makes you wonder if and how the community will come together to address these issues.