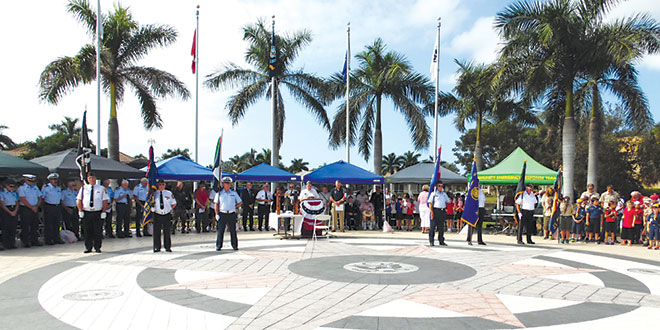 With many moving moments, the Veterans Day celebration at Veterans Community Park sparked a huge display of patriotism from young and old on November 11.

Retired Capt. Wayne Smith described his Vietnam captivity after his Air Force plane was struck by mortar fire and he had to eject. He spent 1,882 days in what was described as the heartbreak hotel, or Hanoi Hilton.

“The plantation was an 8-by-10 foot cell with one air hole,” he said. “’Survival’ was keyed by his fellow captive in the next ‘room’ who taught him a code so that they could tap on their cell walls for communication. “He tapped, ‘Keep your spirits up, God bless,’” Smith said. “And he had been there 3 ½ 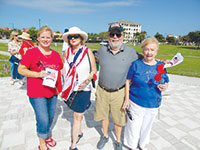 years before me. Tapping, we prayed together.”

Smith said he was one of 591 released prisoner of war servicemen out of 766 from that camp. Sadly, 114 were killed in captivity, he said, with the others still not accounted for.

All shared a moment of silence as Civil Air Patrol pilots Mick Thorstenson and Jamie Trudeau passed overhead in two T-28C aircraft, with one plane veering off as a reminder of those who had perished and those still missing in action.

Lee Rubenstein, commander of American Legion Post 404, distributed vials of sand that came from Normandy where he had experienced D-Day on Omaha Beach. Emcee Keith Dameron described how Rubenstein “stood on the sands of Omaha Beach, channeling the emotions and experiences 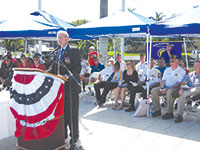 At the ceremony, Rubenstein gave Marco-area WWII veterans the sand-filled vials. As Bob Corriveau of the Civil Air Patrol named each veteran, Rubenstein handed him a vial and they shared a salute.

After the playing of taps in honor of all servicemen, Dameron said he expected everyone there was feeling the pride of those who served and serve. A Tommie Barfield student smilingly responded, “Yes.”

Retired Marine Capt. William G. Callow, 95, stood firm in saluting the flag. “Me and three of my buddies at the University of Wisconsin joined together, fighting in the South Pacific,” he said. “Iwo Jima, Okinawa, we fought together, but I was the only one who made it home.”