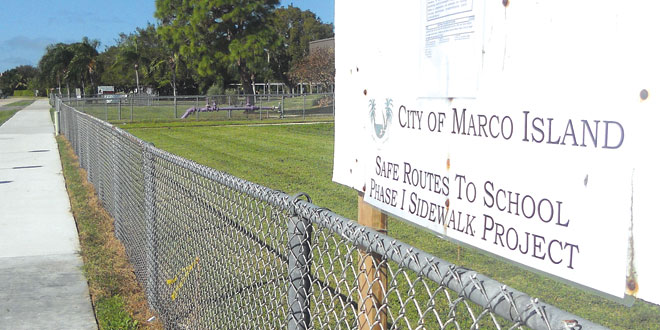 It’s almost too easy to see cycling enthusiasts as hobbyists living in their own little niche of speedy bikes and neon, zipping down their path on the side of the road, but for the group of them who make up the city’s volunteer bike paths committee, concern for creating a safe riding environment extends to the entire community, including its youngest members.

The Safe Routes to School project wrapped its first phase of construction this month: installation of eight-foot sidewalks around the perimeter of both Tommie Barfield Elementary and Marco Island Charter Middle, up Cushing Avenue to San Marco Road. It’s part of a long-range project whose goal is to create an accessible artery of sidewalks so that a child could conceivably walk or bike to school on a safe path from anywhere on the island. Getting there, as the bike path committee chair Al Musico recalls, involved persistence, research, and a very heavily studded pin board.

“You have to build the facilities first. We couldn’t start encouraging kids to ride and walk to school without safe sidewalks,” says Musico, who along with both school principals, city staff and parent representatives, make up the Safe Routes to School Committee, began a grant process about five years ago through the federal program, the National Center for Safe Routes to Schools. They started pinning a map where the students live, creating a route with the schools at the center. In 2008, they received the grant to begin Phase I construction around the schools.

“It’s part of a culture change process,” explains Jim Miller, a project engineer with the Public Works department who sits on the committee. Ultimately, Miller hopes to see the ‘walking school bus’ catch on: when kids and parents pick up fellow students along their route to school and walk or bike in a group. It’s an easy way for children to get the physical activity they need each day. Their school day itself no longer provides it. At elementary level, due to 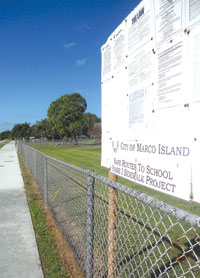 a combination of budget cuts and tougher learning benchmarks, recess is but 20 minutes and PE only happens twice a week.

“Twice a year we survey the [school] homerooms to see who rides or walks and we’re at about 17%,” adds Musico. “The question is, as we build more facilities, will that promote more kids to use them?” Part of the Safe Routes to Schools project involves promoting the safety and benefits of walking and biking to school, now done through the annual ‘Bike Rodeo’ each spring and ‘Walk or Bike to School Week’ in the fall.

Dr. Jory Westberry, principal of Tommie Barfield Elementary, is happy to see Phase I complete. “Groups of kids can now safely stay together [on the new sidewalks.]” Westberry also urges people around the school to remember they’re on a school route. “When people block their driveways it forces kids back out into the street, which defeats the purpose of keeping them on the sidewalks.”

Phase II is set for 2013 and will extend the 8 foot sidewalks on Jamaica Road from Trinidad to Bald Eagle Drive. Musico said the committee also turned to grants from Collier County and the Federal Department of Transportation to complete shared use sidewalks around other key areas of the island. “We’re trying to get as many built as quickly as possible.”

Westberry also points out that weather is a key factor in whether kids and parents walk and bike to school. “We see about 75 to 100 but weather, how hot it is, really affects it.” She also hopes that addressing drainage around the school will be on the city’s radar. “The drainage is so poor that the sidewalks around the school flood. We hope these problems can be eliminated.”

Musico believes putting the ‘in-road’ bike lanes made a big difference to avid bikers and he hopes the shared-use sidewalks will do the same for kids. “We’ve seen a marked increase in experienced riders using the lanes. Now we need the other members of the community involved, including children.”