Part Three – Steve Gober Takes Over, But He Never Forgets His Dad 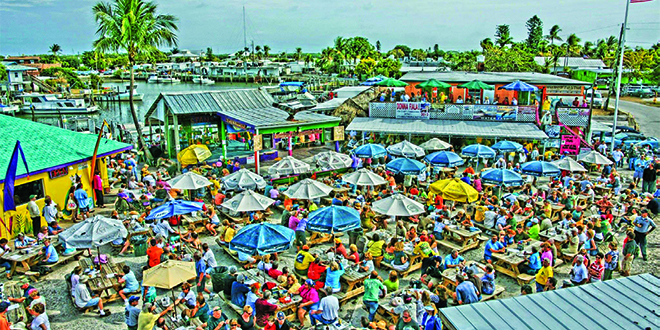 Photo by: Victoria Wright | An aerial shot of the Mullet Festival (January 2012) from the top of an MIFD fire truck extension ladder.

By the late ‘80s, Stan’s was humming along on all cylinders. Business was good, and in 1990, Steve Gober got married. Five sons were born of the marriage – Michael in 1991, Dylan and Ryan (twins) in 1993, and Zachary in 1996. And then, the wheels started coming off. In 1997, Stan was diagnosed with throat cancer and was subjected to radiation treatments, five days a week for 35 weeks. It put him completely out of commission. Had it been a one-man enterprise, it might well have folded. “As sick as he was, dad was worried about who would run the business while he had radiation,” Steve said, “He polled the family to see who would run it in his absence.” Stan was turned down in succession by his two older sons, Russ and Jay, and by Steve’s sister-in-law. Finally he turned to his son, Steve, who at 32 was the youngest of the bunch. Steve jumped at it. “Hell yes. I’ll do it,” Steve told him, “I knew it was a great opportunity. I had been helping to run it anyhow. Besides, I knew Dad would pay me. He was loyal to his employees. Dad told me he would take back the business after radiation, but he never did.” Steve jumped in with both feet.

At that time, Stan’s had entertainment only on Friday nights and on Sundays. Stan had asked Norm and Debbie Pelletier, styled as Hot Damn, to come in on Friday and sing a couple songs during the break. Steve loved them and, without asking his dad, asked them to perform on Saturdays. The first Saturday they performed, Stan drove by, saw a larger than usual crowd and dropped in. “What the hell’s going on here?” he asked Steve, “I’ve never seen that many people here on a Saturday.” Steve told him he had booked Hot Damn for Saturdays and waited apprehensively for his dad’s reply. “You’re doing a good job,” Stan told Steve, clapping him on the shoulders, “don’t worry about it. Just continue what you’re doing.” As time went on and business kept improving, Stan took Steve more and more into his confidence and began to prepare his son for the inevitable. “When I die, you’re going to be OK,” Stan told him, “You know everything you need to know about this business. When the time comes, get those papers from the cabinet over the TV and take them to Fred Kramer (Stan’s lawyer). He’ll tell you what to do.” By the way, Stan added, “There’s a hell of a lot of money under the stove. Come and get it. Just don’t steal from me.” There was upwards of a five figure amount of cash, when Steve opened the box.

During his cancer treatments in 1998, Stan even began preparing for his own funeral. “When I die,” he told Steve, “I want you to have my funeral here, on Sunday, with my casket on stage. Make it the biggest party of your life and give everything away. Be sure and play the National Anthem at 1:00.” Stan was even more specific in 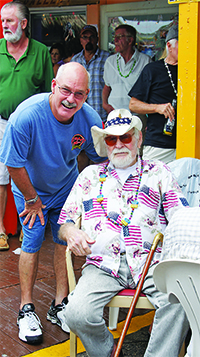 Photo by: Victoria Wright |Stan’s last appearance at a Mullet Festival (January 2012), with his son Steve.

his will and as a final act of trust in his youngest son, he gave Steve the power of attorney to do all that he had asked. Stan’s cancer went into remission after the treatments, but for the next 15 years, he only appeared on Sundays and allowed Steve to run the place. The results speak for themselves. Finally, in 2012 Stan’s cancer returned, and on June 18th he died at the age of 86. Now it was time for Steve to put on the massive funeral celebration his father had requested. It was set for Sunday, June 24. It almost didn’t happen.

“On the day of the funeral, it was rainy and stormy,” Steve said, “There were 40 to 50 mile per hour gusts and the power went out. I called a buddy at LCEC and was told that there had been flooding and most of the power was out throughout Collier County.” He promised to get Goodland’s power back on, and it did come on, briefly around noon. “The phone was ringing off the hook, with people asking if the funeral was still on,” Steve said, “By this time I’m getting desperate. The funeral was due to start in an hour or so. The weather was awful and there was no power.” Another call to LCEC revealed that a tornado at the Iron Rhino had taken out two utility poles. “At this point, there was nothing for it, but to round up all the generators we could get ahold of and hope for the best. We were expecting upwards of 1,000 people to be at the funeral. It was a hectic and stressful time. I knew that LCEC was doing their best for us.” Somehow the funeral started as scheduled, with Stan’s favorite rendition of the “Star Spangled Banner” by Sandy Patty. “At about 2:30, as the grandkids were removing Stan’s casket from the stage, the sun came out, and the power came back on. It was a powerful and moving moment for all who were present. Following a procession to the gravesite, the crowd, estimated by Steve to be about 1,000 strong, returned to Stan’s. “We all got drunk and had a hell of a party,” said Steve, obviously enjoying the recollection.

Then reality set in. Stan, the main reason people had flocked to Goodland, was gone. “There were rumors that Stan’s would never reopen,” Steve said, “Going forward, I didn’t know what to expect. I wondered how many people would not return. The next weekend, by 3:00 the place was packed. I knew then that we were going to go on. We have good music and people want to hear good music.” Stan had told Steve that after his death, Steve had to get up on the stage and introduce himself. Steve, who operates behind the scenes and avoids the limelight, acceded to his father’s wishes. “I was shaking as I took the stage. I was really scared,” Steve said, “I told them that I was Stan’s son, had been running the place for years, and that we would continue what we had always done.” Steve assured 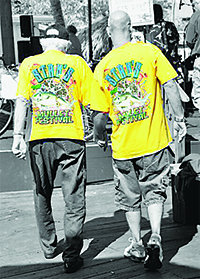 Photo by: Victoria Wright | Steve helps his dad to the stage at his last Mullet Festival (January 2012), five months before his death. Steve calls this cherished photo, “You will never walk alone,” and made it into a poster that hangs at the side of the stage.

the crowd that they would continue to play his dad’s favorite songs (most of which Stan had written). “Since that time I have always made sure that Dad’s songs are performed by someone who knows them.”

For the past 17 years, Steve has leaned heavily on his life’s partner, Patricia “Trish” Oehler, with whom he makes a home in Naples. Trish takes care of the book work and also books the entertainment. She can be found waitressing and bartending at night. She also helps with the hiring and firing of the help. “Steve is so much like Stan in the way of too big a heart when it comes to firing or yelling at the help, so I usually have to do that,” she says, “He handles all the ordering.” Steve’s five sons, born of a prior marriage, all help out, with Ryan putting in 12-hour days at Steve’s side during season. All of his boys work at Stan’s (except Zachary, who is at college), and it is hoped that one of them will take over for Steve one day. Trish Oehler is Steve’s soulmate and partner. She has been adopted by the boys as their stepmom. Their mother, Shanon Gober is still very much a part of their lives. Both Shanon and Trish helped raise the boys and get along well. “These boys were a godsend to me,” says Trish, “I was unable to have kids and wanted them very much.

Restaurant/bars have a notoriously high turnover rate. A large number of the Stan’s crew, however, has been with the restaurant for years. They are as fiercely loyal to Steve as they were to Stan. Their loyalty has been repaid by both father and son. Stan’s ends their winter season on May 30, coincidentally Stan’s birthday. About 20 years ago, Stan began taking the entire staff down to Key West (on his tab of course) to show his appreciation to them. Steve and Trish have continued this tradition into what has become a celebration of Stan’s birthday and of his life. By all accounts it is one hell of a four-day nonstop party from Monday to Thursday, beginning with a trip on the Key West Express, and a full day at Smokey Joe’s on Tuesday. Stan loved it. It is at Smokey Joe’s where Stan’s birthday is celebrated. “It became such a tradition that whoever was playing there would let Stan get on stage and sing a couple of his songs. One of them would be the ‘Yankee Dollar.’ Jeff Hilt would accompany Stan on his guitar,” recalls Trish, “Stan would give all the money he made to whoever was playing that day.” Starting in 2007, the Hot Damn duo started showing up for the fun. After Stan’s death, they continued playing his songs at Smokey Joe’s. No one does it better.

I wanted this article to be about Steve. He obviously wanted it to be about his dad. I trust we have reached a compromise. Steve is content to run things from the sidelines, and he is running them extremely well. He will never forget the father and closest friend who made it all possible.