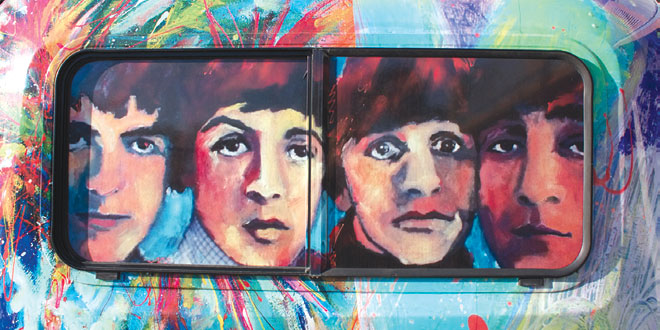 The music of the Beatles has been an inspiration for Lovegrove.

Leoma Lovegrove is as colorful as the portraits she paints and the trailer she travels with. She’s passionate, playful and innovative. She takes ideas and runs with them — literally. Beginning in Marco Island, on Thursday, Jan. 16, Lovegrove began her “Painting Peace” project at the Blue Mangrove Gallery. The project will travel from island to island with her: Sanibel Island, Captiva Island, Pine Island, Staten Island, Long Island, Anna Marie Island, Useppa Island and so on. Where will it stop? No one knows.

“Painting Peace” is, “inspired by, but not endorsed by,” the Yoko Ono exhibition, “Imagine Peace” currently at the Bob Rauschenberg Gallery in Fort Myers

through March. During this time, Leoma’s traveling project will continue. As she makes her way from island to island, those who come across her path will have the chance to contribute by painting a peace sign on a 9-by-12-foot museum quality canvas.

It all kicked off at Blue Mangrove Gallery on Marco Island. Celebrating its eighth birthday, Blue Mangrove has carried Leoma’s works since its inception. Owner Christie Marcoplos immediately said yes when asked by Leoma to host the kick-off party. Dozens of peace signs were painted that afternoon — all in shades of green, blue and purple. “We may run out of room just as we’re getting started,” Leoma 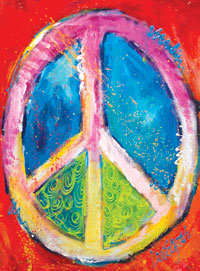 “It’s kind of odd because I’m doing this, yet Yoko Ono and I differ politically. She’s pretty liberal. But you know, who doesn’t want peace? Then again, that’s what I liked about John Lennon because he just brought so many people together,” she added.

Leoma’s love of the Beatles is captured on her brightly painted trailer and on many of her canvases. Their lyrics are painted on her artwork and even her jacket. To say their message of peace and love made an impact on Leoma would be an understatement.

The birth of “Painting Peace” comes from those ideals, giving the project more meaning and bringing it full circle for the 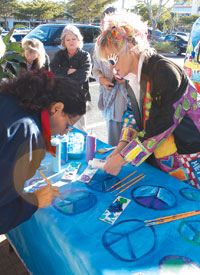 Leoma joins others in painting peace signs on her large blue canvass.

People were eager to not only paint peace, but to wish for it as well. When they were finished with their sign, many filled out a card with their wish, placing it in a jar filled with many more wishes. “We’re collecting peace wishes. There’s a peace tower in Iceland that (Yoko Ono) started, so we’re collecting them on this journey. We’ll present them to Yoko at the show, and she’ll take them to Iceland.”

Where will the peace painting end up? That still remains a mystery. It might just be at the Lovegrove Gallery & Gardens at 4637 Pine Island Road NW, Matlacha, FL, 33993. Follow “Peace Painting” on Facebook or call 239-283-6453 for more information.